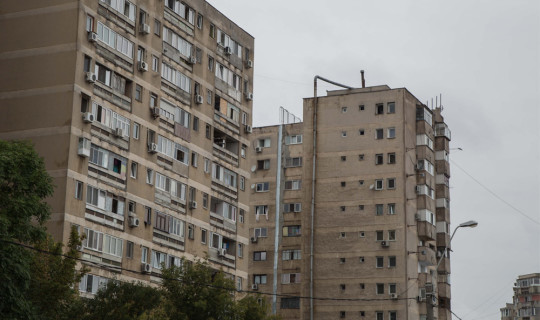 The Park was this small playground area where I used to play with my friends when I was a child. It had no sand, just small stones and dust instead; one slide; four swings; a seesaw and a metal arch.

The Park was surrounded by concrete blocks of flats and our favourite was one that we named ‘S’. It hosted over a thousand studio flats and our parents forbid us from playing in the building. There was this rumour around the neighbourhood that supposedly dangerous people lived there and that it was an unsafe environment for children to play in.

However, mostly old women lived in the building and they were obsessed with keeping the corridors quiet and clean at all times. The block was not as spotless as they intended. Being a huge building, it had long corridors with flats on both sides, resembling a hospital. There was very little natural light, but we were more than happy to explore them all, floor by floor. Being so crowded, it was so easy for the people living there to hear anything that was happening in the corridors.

Even if you were only whispering while walking, the space would amplify and create a very loud noise, which is exactly what made this place so exciting for us in the first place. We used to rollerblade on the corridors eighth children at a time. The infernal echo created in the space would make the adults threaten us. They came out of their flats and shouted at us to keep quiet and accused us of being spolit. They had never heard of such awful behaviour. Then they concluded there was no respect for the elderly anymore and that we were just rude and nothing good would ever come of us. The whole brouhaha would make us laugh hysterically which only doubled the amount of noise we made. For us, this was definitely one of the funniest things to do in the neighbourhood.