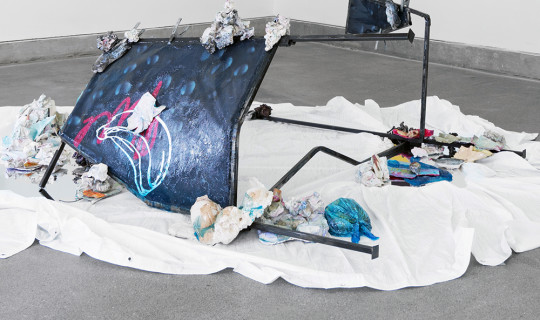 What You Know About Fresh!, 2015, Mixed-media insatallation

To me a blue bag is a symbol of London.

The title of my work in Bloomberg New Contemporaries 2016, What You Know About Fresh!, is informed by a Red Hot Entertainment song that’s both immature and pretty interesting simultaneously. Junior Spesh is an ode to chicken and chips. Created as a parody of the grime genre from within, it managed to break out into the mainstream, bootlegged via ‘rubeboyz’ phones across the UK, becoming a YouTube banger. If you’ve ever been on a night bus, chances are you heard it, played on loudspeaker and often accompanied by the phrase ‘Jheeze’. ‘Jheeze’ became ubiquitous after 2am because of a Giggs song, Talking Da Hardest and is pronounced in a high-pitched way. The video is a good example of a UK lo-fi ‘crew video’, which is the most popular format to show off your gang. The aggression in such videos is genuinely disturbing but at the same time amusing. Such postures both implement and disparage social and cultural barriers, embracing stereotypes while attacking their integration, pastiching and lampooning via rehearsed hostility. These ‘Rubik’s Cubed’ linguistics seem like modern day Folk music, young poets’ rhymes blasted to our generation via the number 30 bus.

Imprints on the surface of culture interest me: phrases on night buses, rubbish left on the street or a van with, ‘Also Available In White’ traced in the dust on its back-window. The scribing finger pressed into the grime to pass comment and display wit. Artworks are just mirrors for culture that are dirtied by the accumulating dust of all that exists. As artists we are sticking our fingers onto that mirror and writing banal/witty/dumb thoughts in the dirt on its surface. People leave marks to prove they exist, or, maybe they just drop shit because they don’t give a fuck.