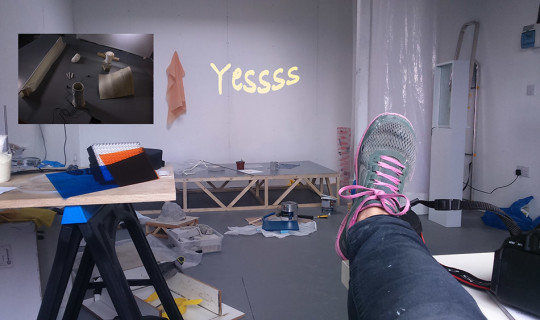 Me, and all my stuff, are well settled in the studio and a year feels longer than I thought it would. In my first few months I quickly made several works that had been on my mind for quite a long time and the pace was fast. It also felt necessary to surround myself with a lot of stuff, materials and tools that would be a pool of things to draw from, so there has been lots of accumulation and heavy lifting. While in one sense it is logical and obvious that a year in a large space would have a profound effect on my process, it wasn’t until it actually happened that I’ve fully appreciated the luxury of having the resources of space and time.

The period of accumulation has facilitated a kind of material library and new works are arising from materials resting and waiting together, occasionally being reconfigured and all the while contemplated and considered. The materials and sculpture sometimes lead the moving image, work which has often been a more notebook bound process by necessity. It’s interesting, exciting and FUN!

The studio has always had good vibrations and, now it’s rather full, it also thrums with exciting sculptural potential. I’m looking forward to the coming months.