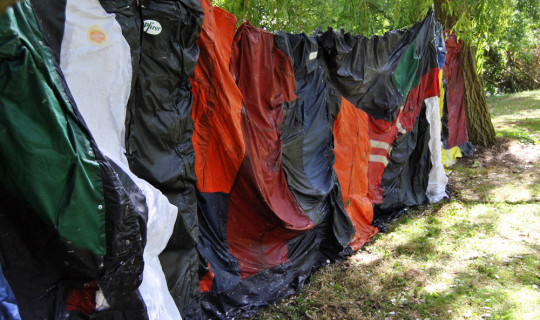 I’m not the only person my age to burn themself out physically trying to live in London and pay rent on a house, studio, and still have a social life; trying to hold down a service job where they say ‘take some painkillers, I can’t cover your shift’. It’s been really hard to start a residency in a new city with glandular fever; it’s been hard in fact to do most things with it in the last five months. But, lots of good stuff has come out of it and given me new perspectives. Not being able to do things physically, with your brain still whirring gets you thinking. I probably shouldn’t have run the London Marathon with it – but that’s back in the first month when I just thought it was flu.

So now it’s time for something completely new: settling into the residency at One Thorsby Street, Nottingham with New Contemporaries. I get to go in everyday, not at my parents place on a tarpaulin outside after quitting my job and house in London, and I get to bring to it the wealth of stuff I learnt whilst being ill. I started a couple of months ago with making work for an exhibition in Norfolk, where we had to make one hundred and one small fifteen centimeter square works. Therapy whilst being ill – cutting, pasting, weaving, dying, sewing, casting, waxing, using up all these scraps laying around – reminding me what I was interested in the first place with art - making. Next, I’ve made a seven-meter piece that’s outside at a sculpture trail in Norfolk made out of boiler suits that my friends came to help me tear, sew, cast and install. It’s about jobs and work, and from my being ill my lack thereof. It’s about jobs that in the moment are in a state of flux, it’s about manual labourers and how their body is their livelihood, and the gap between workshops of labourers and workshops of artists… it’s like the labourers are working practically making and fixing functional things in our lives and artists are taking it all apart and seeing what it means.