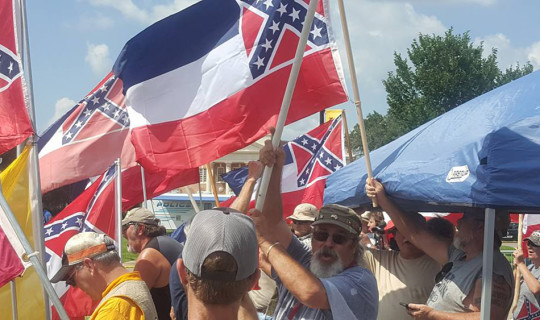 Protestors against removal of state flags from University of Southern Mississippi

In the work Mississippi, I explored the community that I can no longer call my home. Born there, grew up there, had access to people and places and knew where to go, but it was not a comfortable place to be. Racial, political and economic divisions exist.

I recently explored the White Cube exhibition From the Vapor of Gasoline, a borrowed title from Jean-Michel Basquiat’s Peruvian Maid to portray a society running on empty. The artists collectively represent an expression of disillusion in the American Dream between the 1970s – 1990s.

The artists deconstructed America’s national self-image using appropriation and inauthenticity with familiar American symbols − the Stars and Stripes, the cowboy, the dollar bill to challenge ideologies inscribed within those signs, revealing a darker history under the veneer of the United States narrative.

Since that time, America has become a place that is structured by segregation, rather than inclusion and dream building. The American President runs a steady stream of social media inciting division and hostility. An intolerance for “others” has increased as inequities occur in the distribution of power.

In the work Mississippi, I explored the community that I can no longer call my home. Born there, grew up there, had access to people and places and knew where to go, but it was not a comfortable place to be. Racial, political and economic divisions exist. Most of my Mississippi relatives “open carry”, meaning they have loaded guns in their possession at all times.

The Mississippi state flag is the only flag in the country that still has the confederate battle flag as part of the flag design. A symbol of racism for some, a symbol of history for others. My cousin Joe has been protesting at the University of Southern Mississippi every Sunday afternoon for 102 weeks (he is keeping track) with his small army of “patriots”, because the University president removed all Mississippi state flags from the campus. The Sunday afternoons are an odd mixture of friends that seem to be at a BBQ, and others that are protesting their presence. Hostilities are escalating on a weekly basis, as more anti-flag protestors are arriving to confront the protesting flag supporters.

Scenes like this occur every day in America. As Walter Benjamin puts it, “the tradition of the oppressed teaches us that the ‘state of emergency’ in which we live is not the exception but the rule”. It’s not normal, and yet it’s the same as it’s always been.

Andrea Zucchini: 5 months into his Studio Bursary with SPACE