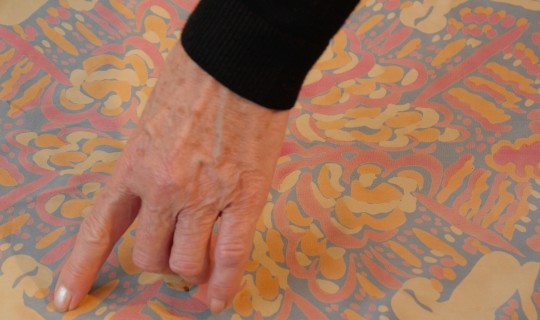 The building chosen to house the Cryséde enterprise at St. Ives was the old Western Pilchard cellar at the base of the ‘Island’, actually a grassy promontory linked to the town by a low lying area.[1]

Patterns come from everywhere; from shadows, from scrubbing wood, from writing, from birds in flight, from cooking and raking, from scraps of paper and bits of metal, houses, rain, wind on the sand.[2]

A craftsman taps down a woodblock on a long length of partially printed cotton. The cotton has been stretched over a soft blanket and clamped down to create the right surface for printing.[3]

The basis [of the print] is an alternate line of triangles, printed in rust with a potato block (a potato because its surface is strangely willing to pick up the mineral dye and make an even, flat and sharp-edged print).[4]

Janet: It turned out that in the later twenties, rather rich women wanted to have their clothes on the beach. And you wouldn’t go out in a Crêpe De Chine outfit… so linen clothes, linen designs were perfect.[5]

The canvas has a curious and interesting variation in colour secured by a combination in the weaving of linen and jute which [are] dyed in the piece… This variation of colour affords the same joy to the thinking beholder that the uneven weave from a hand-loom does, or the uncertain texture of a hand-made paper.[6]