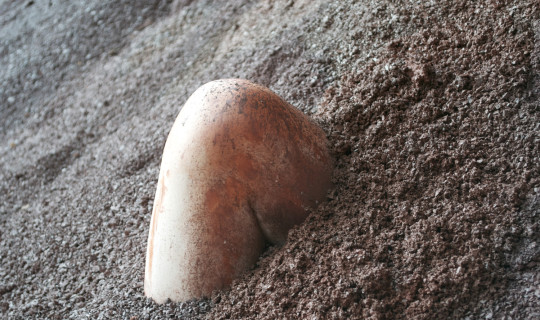 The headframe, cranking into view as we drew nearer, was mottled with scabs of rust. It had been raining and our tyres scrunched sloppily up the track, sploshing through potholes and emptying them of their blood red contents. But only momentarily. They refilled behind us, the fluid oozing out of the ground, trickling back.

I got out of the car and within a few steps the tops of my feet were spotted with the red residue. Like a Lilliputian examining a gargantuan corpse on the dissection table, I picked through the disarrayed heaps of tubing, jutting steel bones and scattering of alien spacecraft-esque organs that had once made up the working body of Florence Mine. Owing her namesake to the wife of the Chairman of the Millom Company, this was the last operating deep haematite mine in Europe when it closed in 2007.

‘Hema’ is the Greek word for blood. Superstition holds it in association with life sustainment and of course, also the opposite: death. It was used to coat bodies before burial, and later miners here were called the ‘Red Men of Egremont’ because they were always covered in it. I wiped at a splatter on the back of my leg but uselessly, only smearing the pigment further and - later - across my forehead.

* Florence Mine is now the home of Florence Arts Centre. The Florence Paintmakers, a small cooperative, are based on-site using the remaining haematite deposits to make art materials.