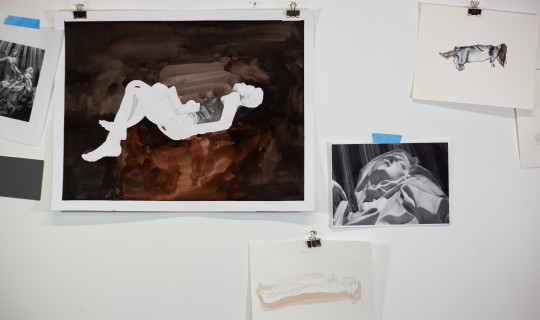 In September 2021 I spent a month in residence at The British School at Rome, supported by New Contemporaries, undertaking a period of research responding to the city as a unique site of cinema production. Films produced in Rome during moments of political, social, and economic upheavals have become hugely influential on international cinema and with it the conventions of how we construct and read images of class, gender and national identity.

Given my interest in the conventions of filmmaking, taking into consideration the site and circumstances of a film’s production, I wanted to consider what an embodied form of filmmaking might look like in the socially-distanced conditions of the time. I had recently started to combine my drawing and writing practice with moving image and performance work, and I wished to use this opportunity to further experiment with this way of working. Here are some thoughts and notes… 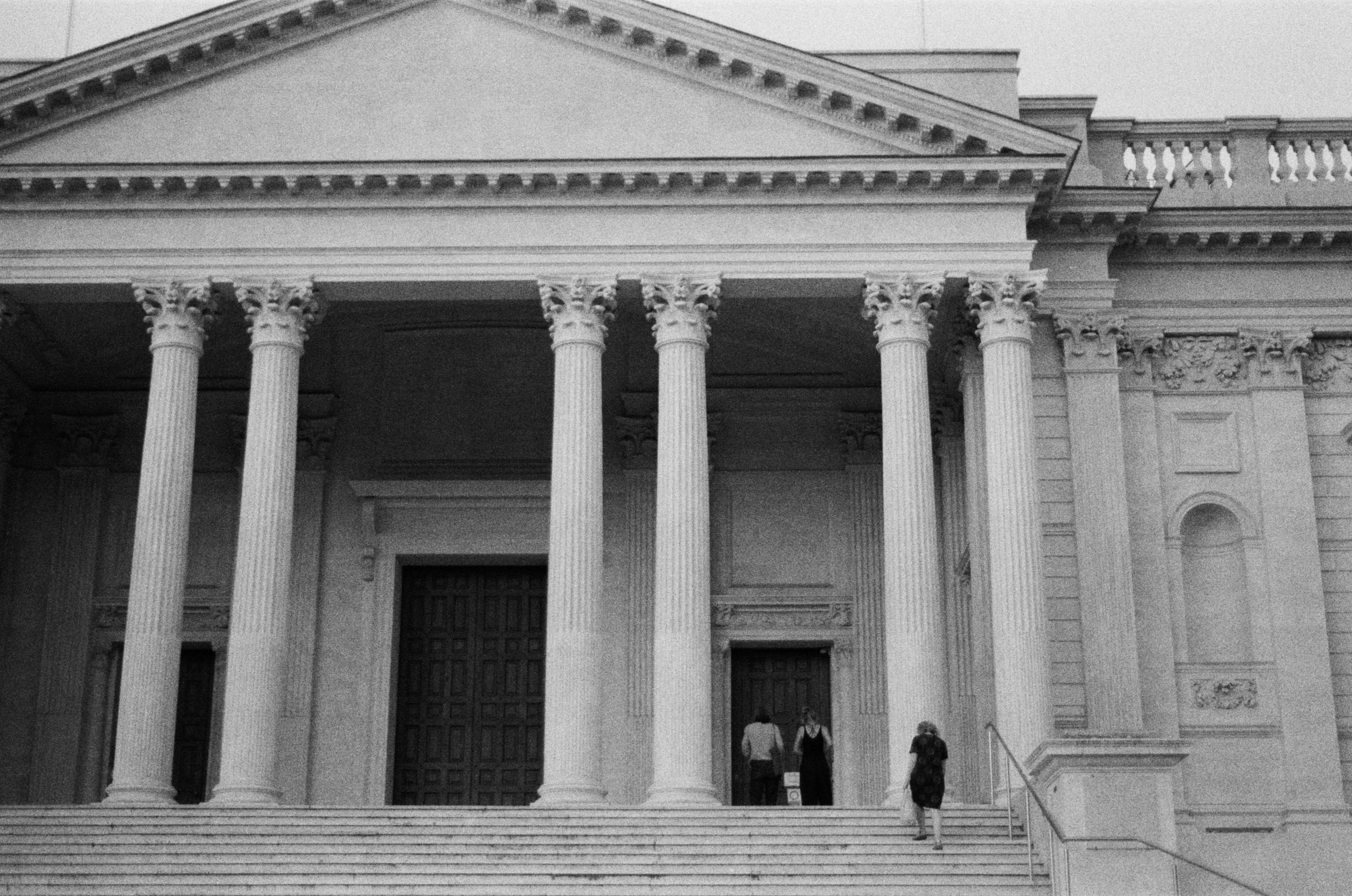 Due to travel restrictions my residency is delayed by eight months and on arrival, I am confined to my studio for mandatory quarantine. Dwarfed by The British School at Rome (BSR) grand entrance and the double height of the studio I eat my dinner seated on top of the table to feel less small. Ascending the stairs to the bedroom mezzanine I watch Nanni Moretti’s ‘Caro diario (Dear Diary)’ on my laptop. The file I downloaded is without subtitles, I drift off, not following the Italian but rather watching the director tour the city on his Moped.

In the morning, small brown ants reveal themselves to take care of the crumbs of my breakfast pastry. I go for a stroll via the internet, starting with the Rome I know through its filmic representation - The Spanish Steps of ‘Roman Holiday’; the Trevi Fountain of ‘La Dolce Vita’; Monument to Vittorio Emanuele II in ‘The Belly of an Architect’; runs along the Tiber in ‘La Grande Bellezza’. I locate the street of Pina’s shooting in Rossellini’s ‘Roma città aperta’ (Rome Open City). The horror of a death, shot on location within the rubble of a city only just liberated by Allied forces.

A medley of Anna Magnani’s films (‘Mamma Roma’; ‘Bellissima’; ‘Le Miracle’) and I am hooked by her ability to play the mother, lover, sinner, saint, victim, and rebel somewhat simultaneously. A symbol of Italian cinema she was nicknamed La Lupa, the living she-wolf—La Lupa being synonymous with Romulus and Remus and the birth of Rome. But it's her role in ‘La voca umana’ (The Human Voice), where she plays a woman self-confined to her room, pacing back and forth, that resonates with me today. 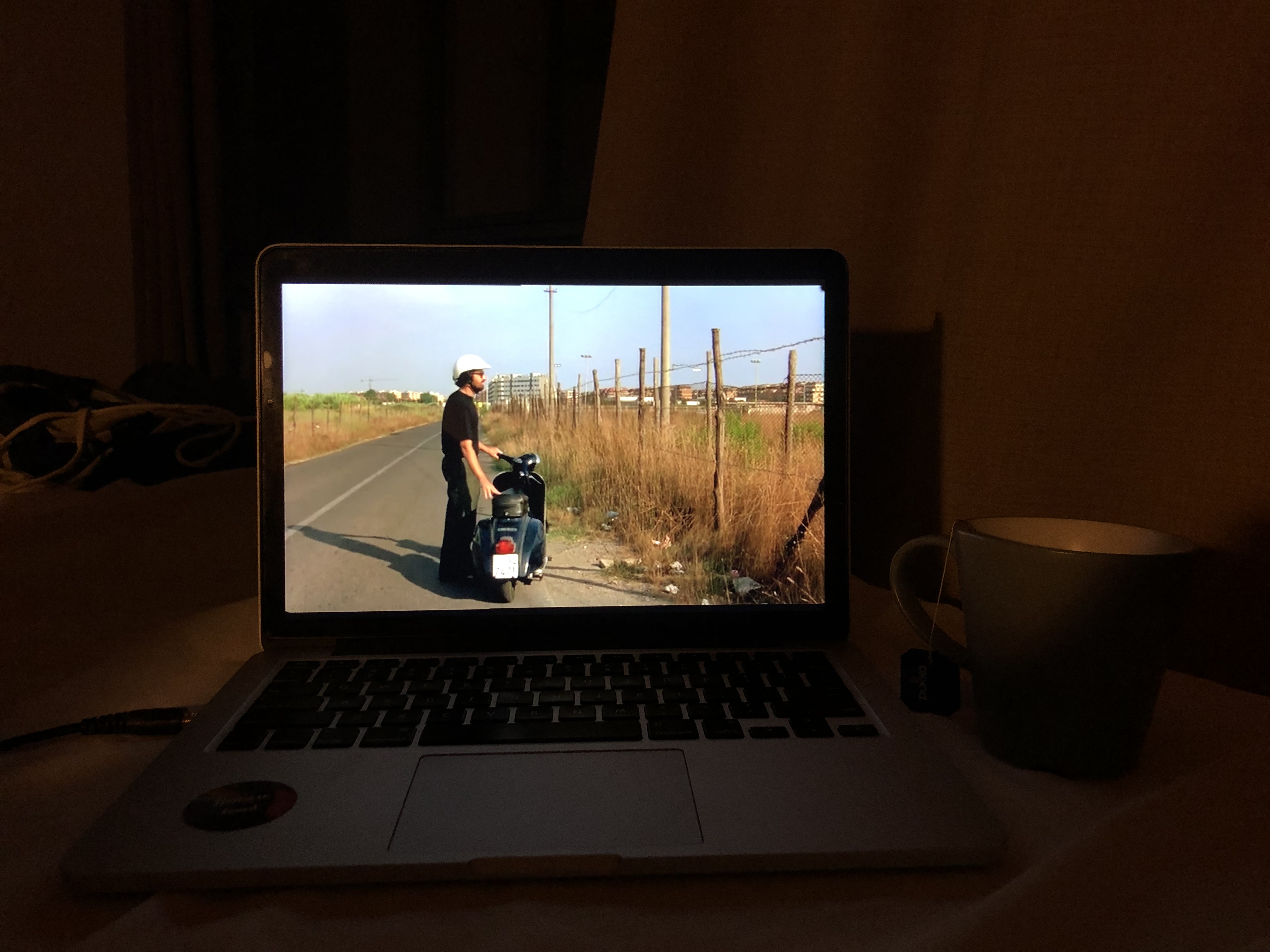 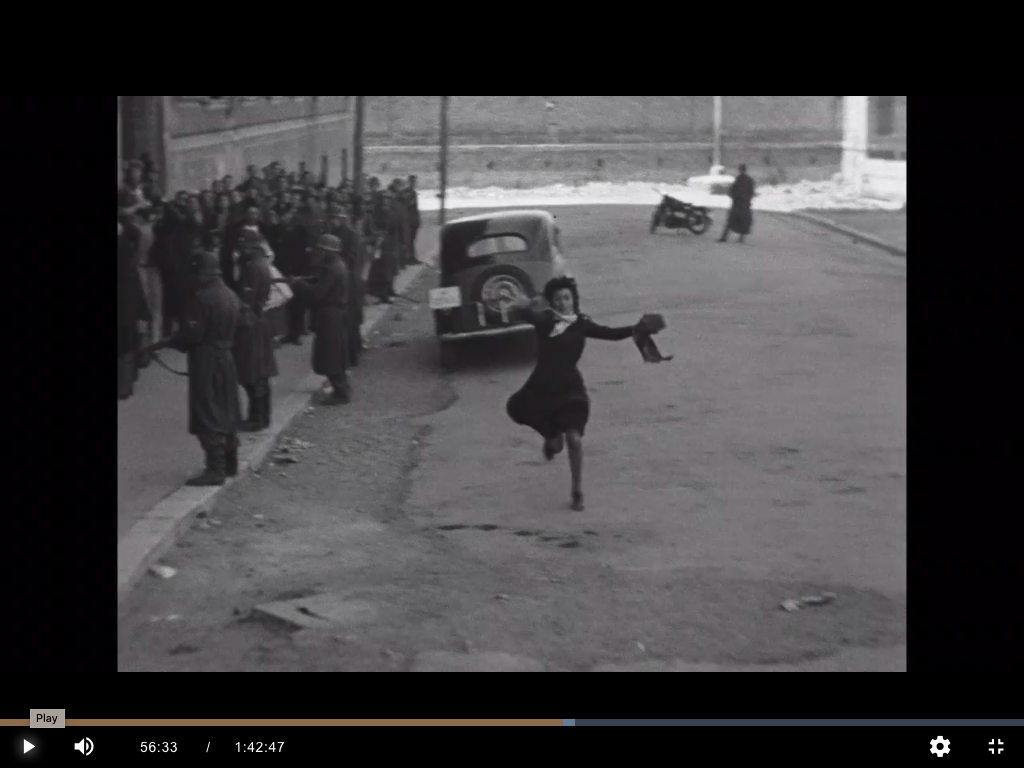 Her wallowing exacerbates the confinement of quarantine and I draw it out, literally with ink and paper. The scale of the studio engulfs both me and the materials I have brought. I again change my orientation to sit on top of the table rather than seated at it and make a resolution to buy larger paper when I leave the studio.

Freed earlier than expected and after locating an art supply store, I end up in Piazza Navona, drawn to the feet of the falling figures of Bernini’s Fontana dei Quattro Fiumi. Marble giants toppling as they keep the obelisk from the waters below. There is a street busker in the corner of the square, seated crossed legged he hovers a meter off the floor. His left hand grips a staff, which upholds the device concealed underneath his clothing, and with it the illusion of levitation. The piazza is quiet, the city fresh out of lockdown restrictions, but the few tourists and locals seem familiar with the trick.

I spent the afternoon drawing bodies of Bernini sculptures from library books. Liquid forms of flesh rendered in stone then photographed, reproduced and here I turn them back into lines again. I leave the bodies adrift in coloured voids as if potentially falling through blue skies and green screens. 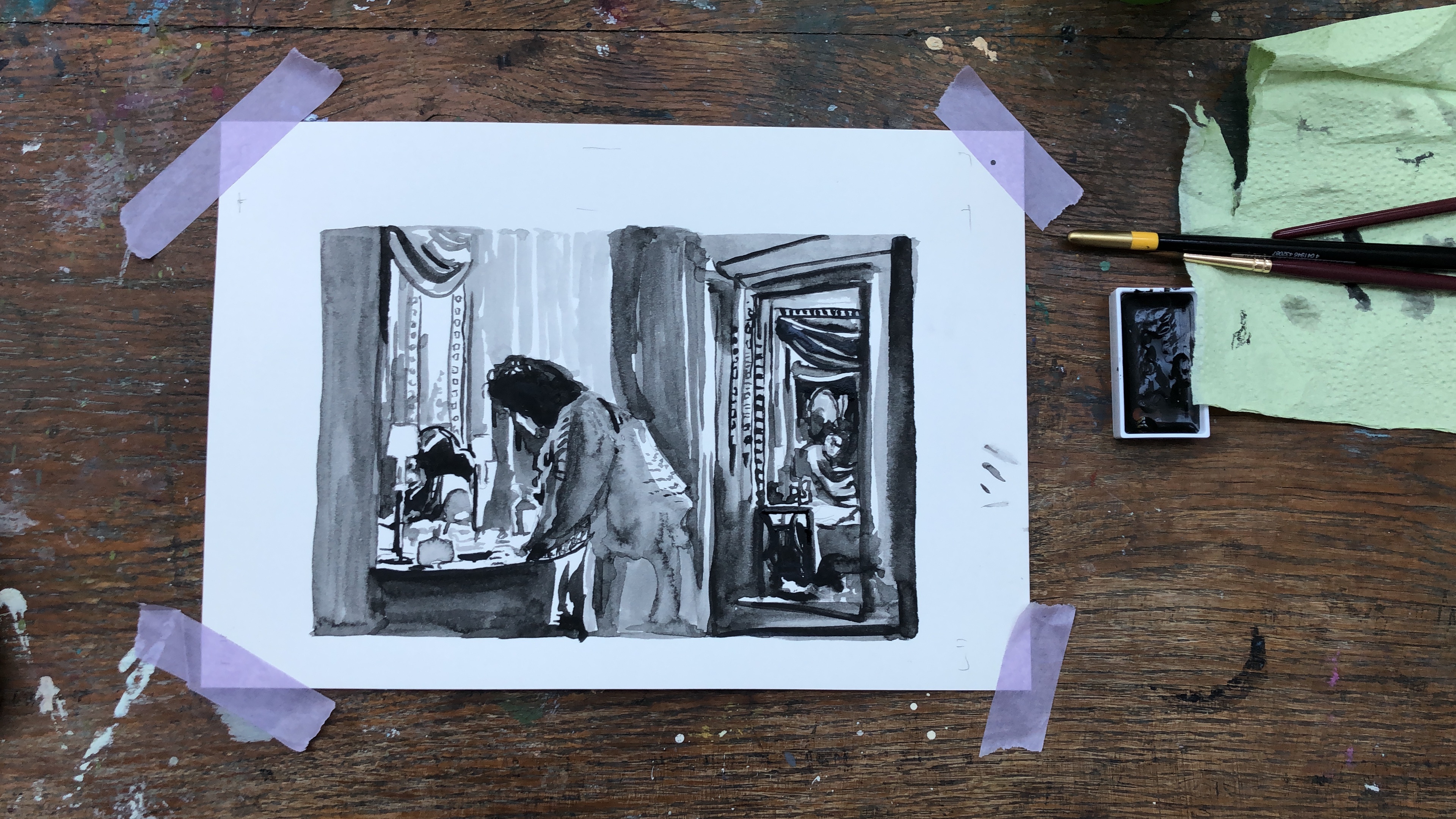 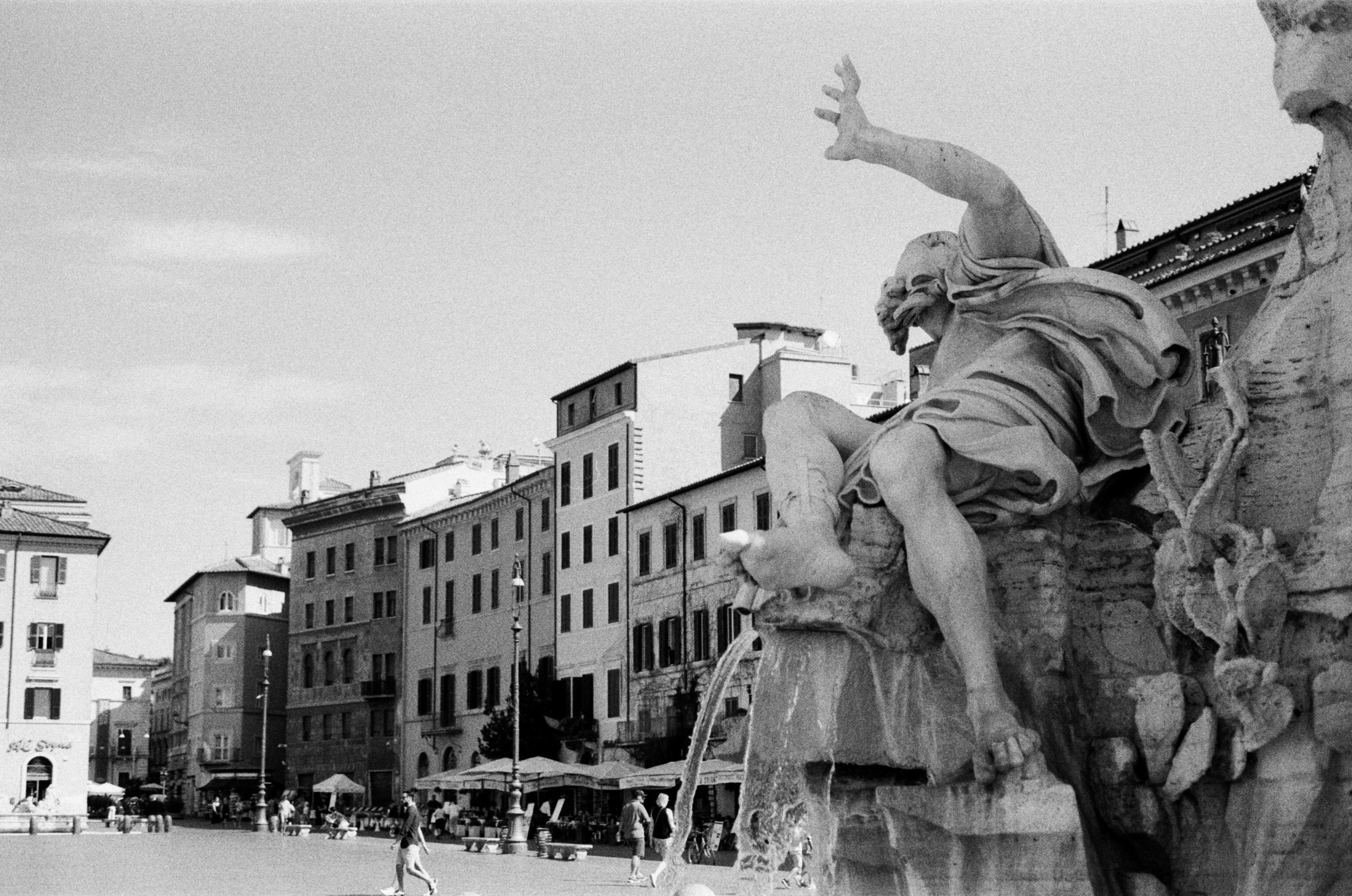 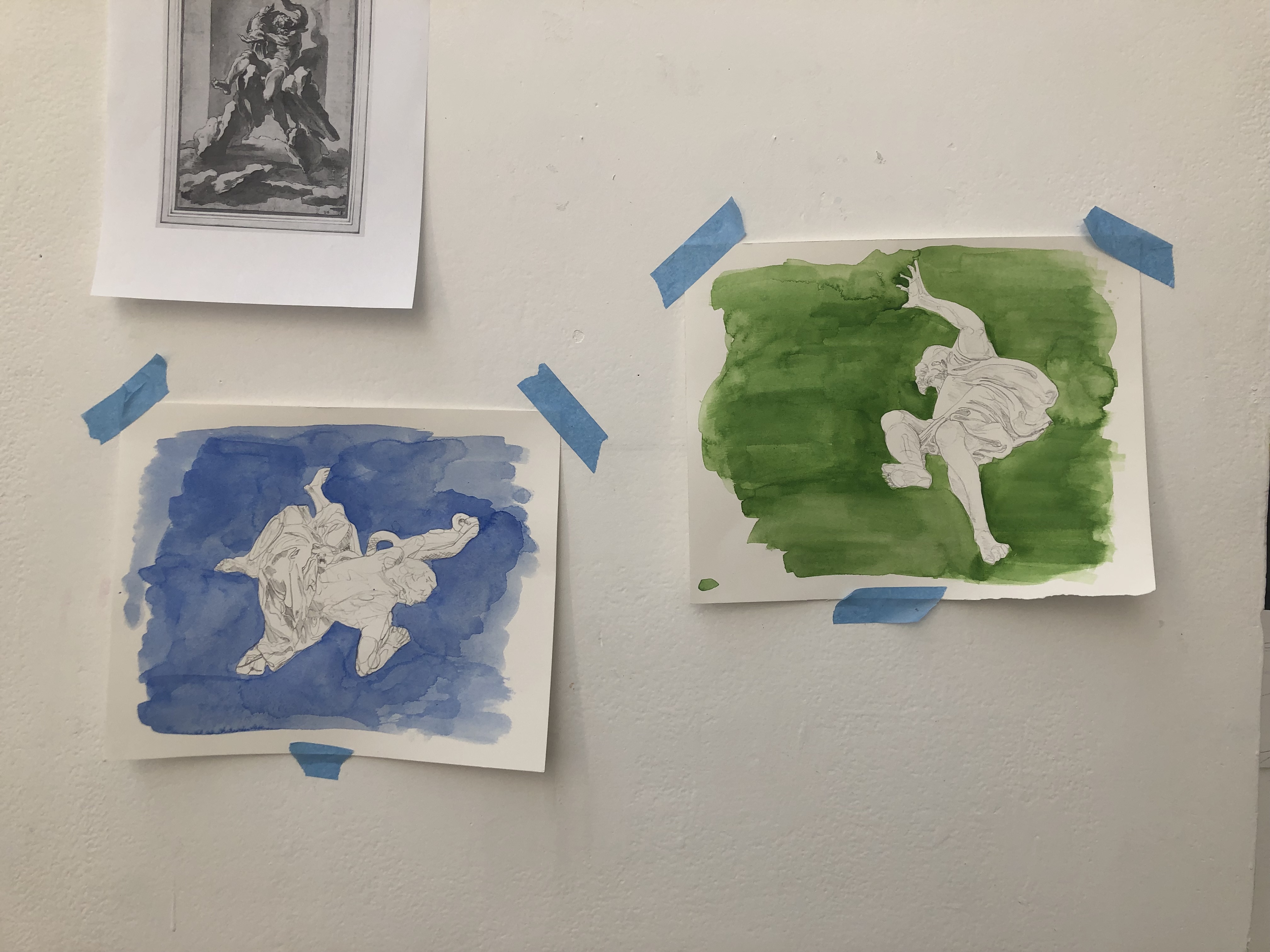 Another day I make a trip to see the The Ecstasy of Saint Teresa only to find her in restoration. I can just make out the folds of her robes behind the scaffolding. Or is that a dust sheet? Illuminated by natural light conducted down a hidden recess. The light reflects off gilded stucco rays.

On Sunday I go in search of a pool to let my body float. A reprieve from the heat, I suspend myself between deep aqua and sky. Figures lap the lengths in animation, the water is like marble. I find a shade of ink in an art supply store named after Sofia Loren and a gelateria called ‘Fanta Morgana’, named after the optical illusion, or the Werner Herzog film.

After re-watching ‘Paisan’, (not specifically set in Rome but a seminal work of Neorealism by Rossellini), I am disturbed by Carmela’s fatal fall to the rocks below, after aiding American soldiers shelter in an abandoned seaside castle. It reminds me of Gustave Doré’s engraving of Dante’s punished sinners. 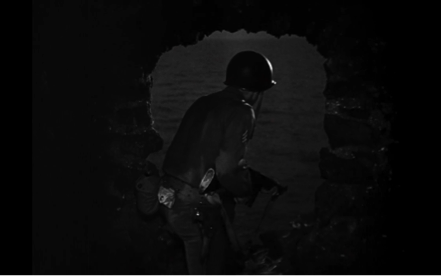 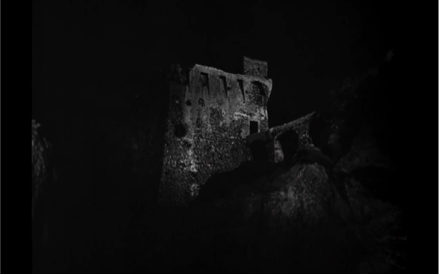 I head to St. Peter’s Basilica to get a high vantage point over the city. On the way, I am joined by a fellow BSR resident who feeds my developing interest in levitation by telling me of the canonisation of Capuchin friar Padre Pio. Reportedly in 1943 a “flying monk” appeared to Allied forces pilots preventing them from dropping bombs on the area of San Giovanni Rotondo where Padre Pio lived.

The narrowing passageways and 551 steps of the dome are challenging when masked and in the heat, but on reaching the top I find Pio’s saint card in the souvenir shop. That day the Pope Francis is in the news for sending out 15,000 ice-creams to prisoners to help them cool down during what has been one of the hottest summers on record in Italy. 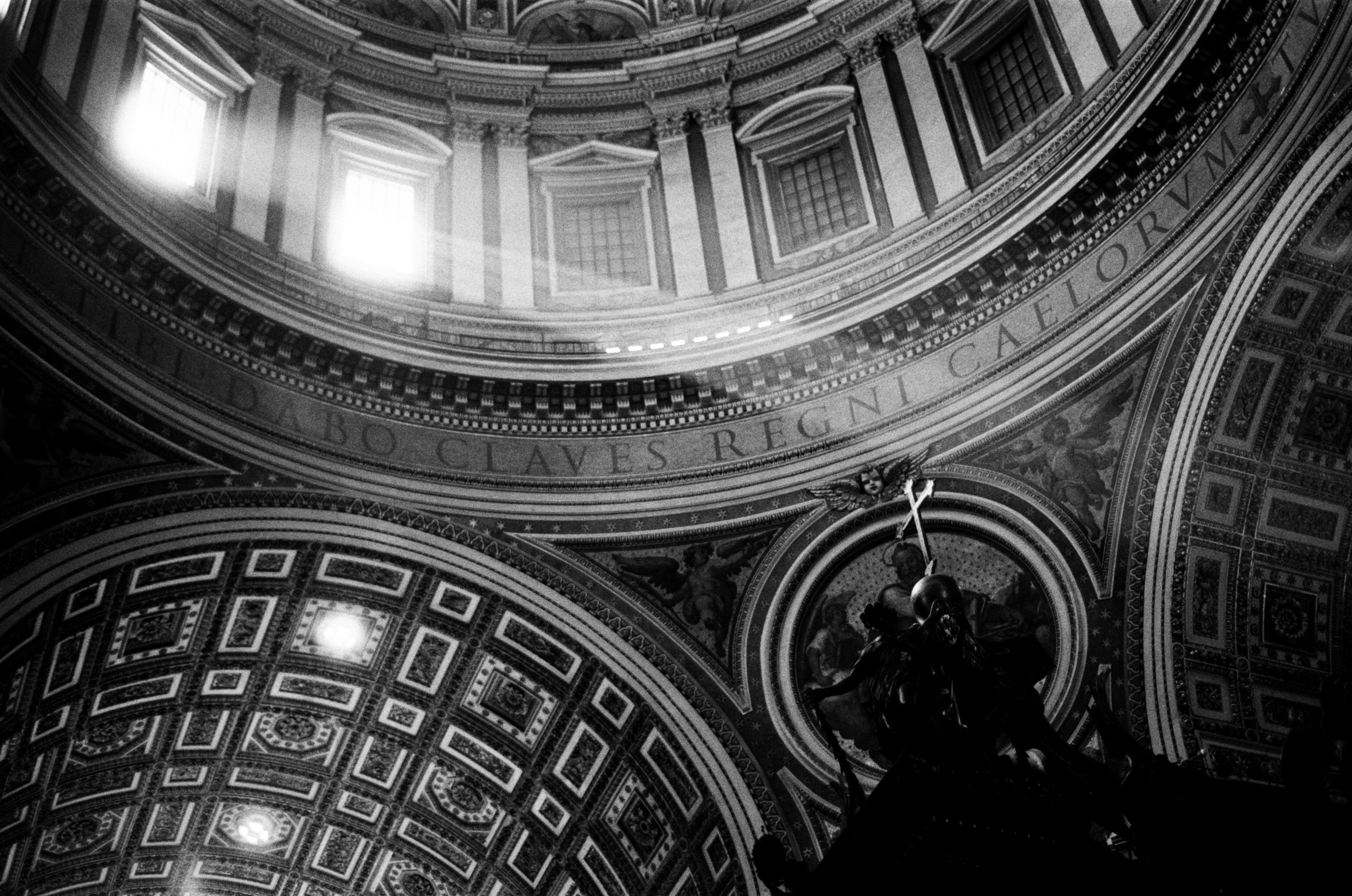 In the studio I watch some of the Elvia Norati’s surviving films via Vimeo links from the Fondazione Centro Sperimentale di Cinematografia - Cineteca Nazionale. Again, with no English subtitles I am left to follow the narrative without dialogue. Occasionally, I pause to copy the intertitles into Google translate, but much of it is lost in dialect. I watch them on my laptop in bed, stripped down to underwear in the heat, the small overhead ceiling fan vaguely panting air around the mezzanine.

Watching films from this era I am reminded of the difference between the collective social experience of seeing films in the cinema and this intimacy of curling around a laptop in private domestic space. The expansion of television, economic recession and now the pandemic has dramatically altered cinema’s production and distribution. My neck aches from walking around Rome, craning to take in the scale and grandeur of churches, architecture, and frescos. Where the cinema once was—the space where we collectively raised our viewpoint to that which is larger than life—now I bend my device towards me or curl around it in various contortions. I consciously start to document my position as I watch these films in the studio: flung out over an armchair; horizonal in bed on the mezzanine; or cross-legged on the floor, face to face with a laptop propped up by a pile of library books.

In the Chiesa Is San Luigi Dei Francesi I discover the phenomenon of pay-to-view Caravaggio’s. Placing coins into a slot device buys you light, illuminating the famous paintings. 1 euro for a minute, 2 for 3. A nun stands to the side, waiting with her phone poised to take a photo of the painting when a tourist feeds the meter. Figures in black voids await light. 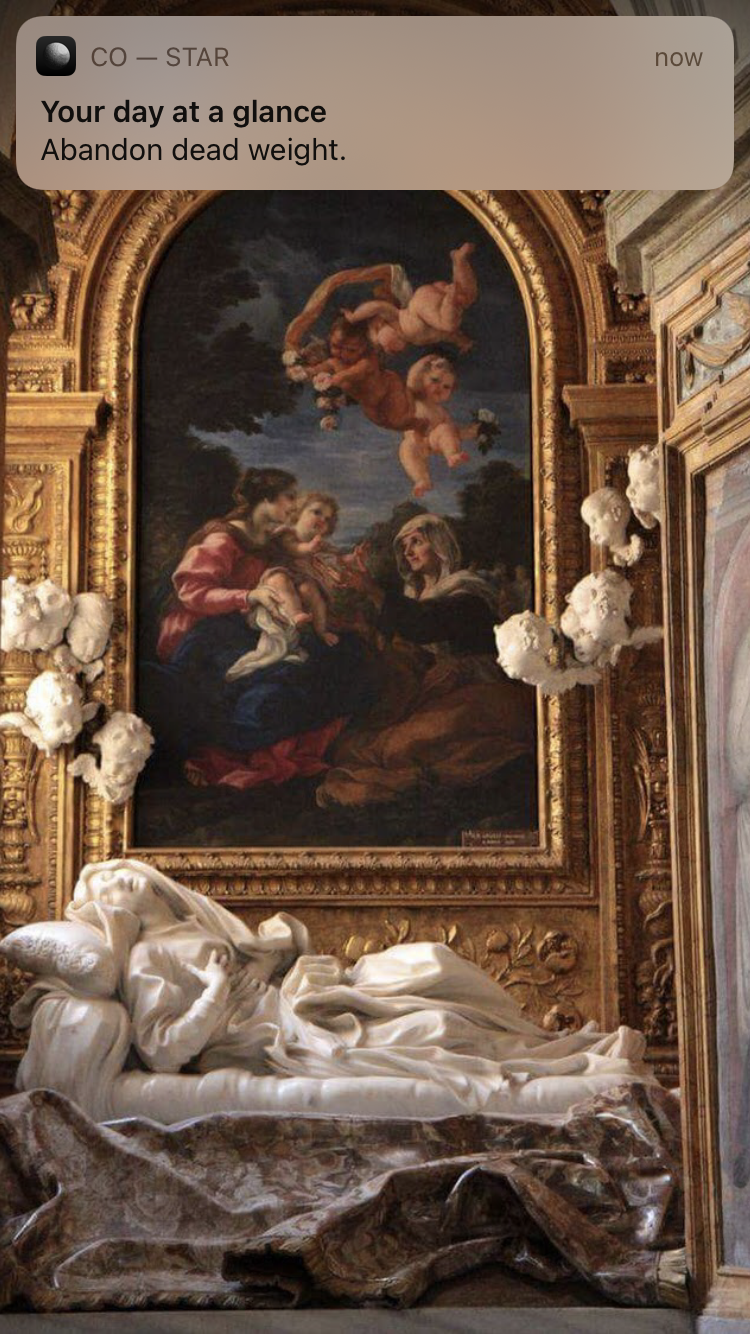 I repeat this gesture as timed drawings at night, on large sheets of paper, giving myself two minutes with the benefit of the projected light to get down a sketchy outline. Then I work back into the drawing with black and gold ink, allowing myself the luxury of scale to quickly render light and darkness, setting a stage for the body. I view them from the mezzanine. A gods-eye view.

I walk around fake Rome at the Cinecittà Studios,
I recognise Hadrian’s Villa from a Peter Greenway film,
I go to a silent disco outside a 24hour pharmacy under the porticos where Vittoria De Sica filmed ‘Bicycle Thieves’,
I walk past the Roman Forum and clock it as the place Simon Magus fell to his destruction attempting to demonstrate his ability to fly,
suspended belief,
Dead weight.

On the mezzanine I lie face down submerged in the bedding, limbs pressed into sheets.
I peer down through the mattress, through to the concrete floor below,
mosaiced with skull and crossbones.
The flying monk and the capuchin crypt not far from my thoughts.
I hover above the tabletop, on which are several tomes from the library, red cotton spines with post-it notes sticking outward from the ivory pages.
There is still a long way to go in this free fall,
so many levitating bodies in mythology, the fresco, the screen.
The body displaced be it for religious, paranormal, or political reasons.
I pick my unfinished drawings up from the floor and roll them into tubes to fly home.
Ants crawl across the floor, piling soil for a reason unbeknownst to me. 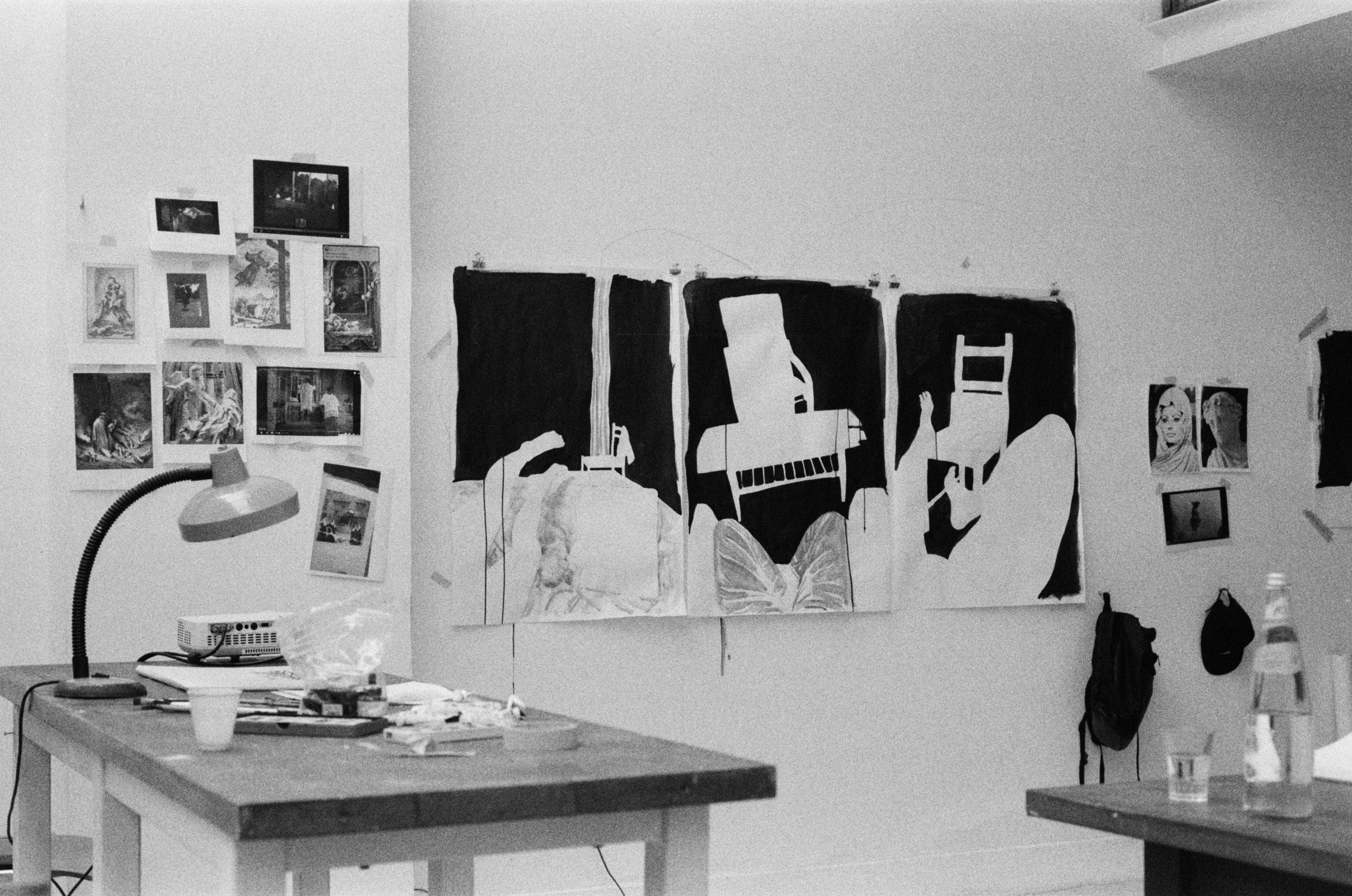 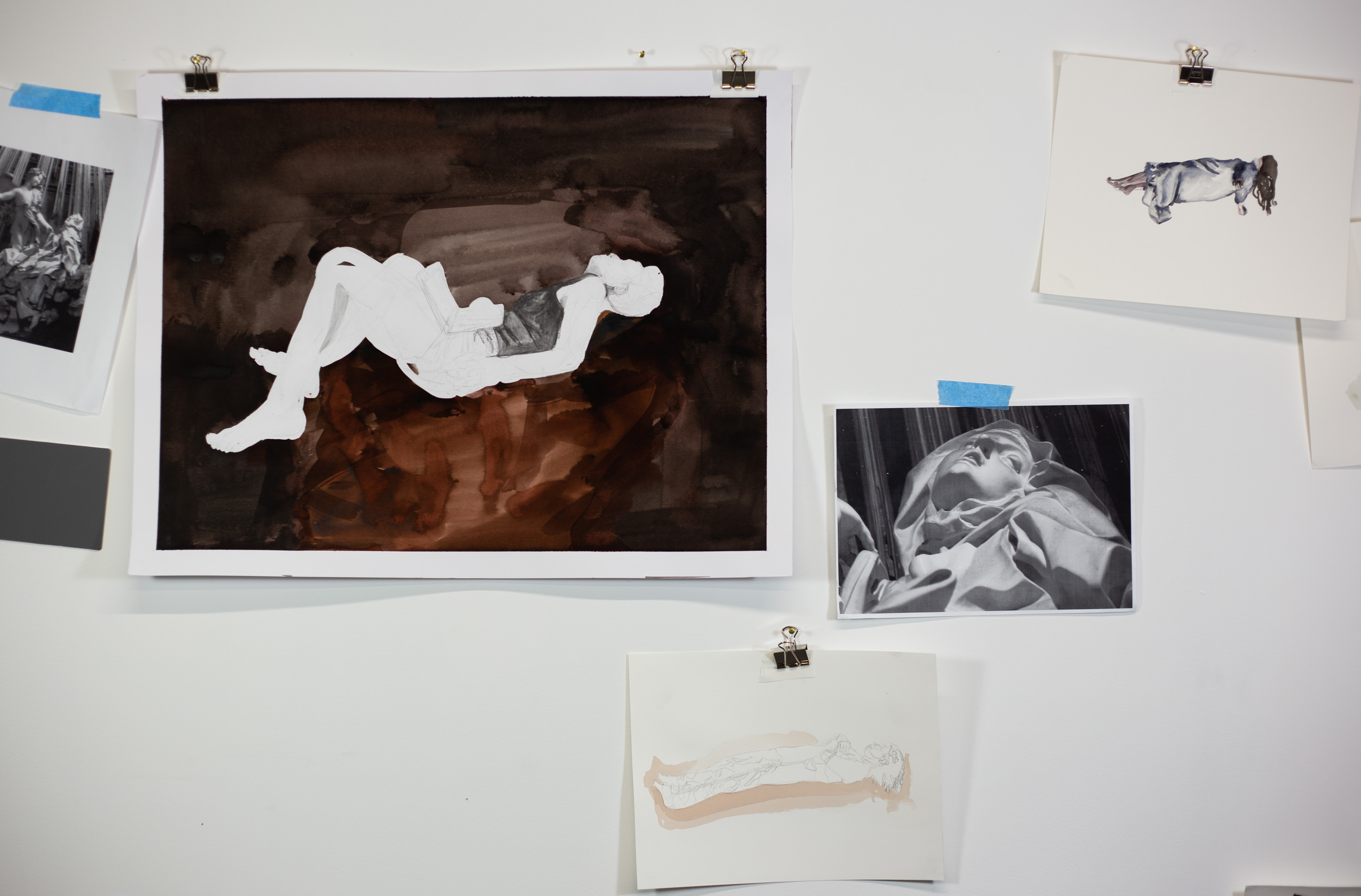