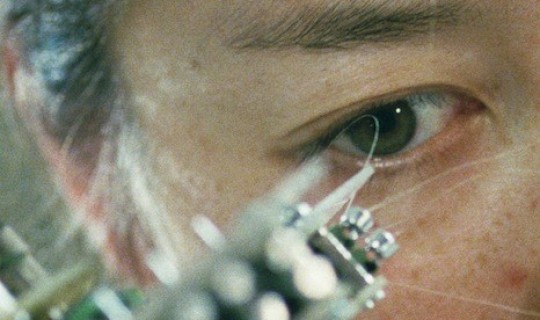 Piotr Krzymowski looks back at the BNC 2012 Film Salon.


Secret films. Secret audience. Not so secret location and participants. The Film Salon accompanied Bloomberg New Contemporaries 2012 at ICA, London from November 2012 until the end of the show in January 2013. It provided a platform for BNC artists and ICA Student Forum members to select film and video works relating to their practice and interests. The material consisted of YouTube clips, artists’ shorts, and feature films. The selector, who would speak about their choice in relation to their own practice, research or ideas that surround it, introduced each screening. By experiencing the unknown, the Film Salon was an attempt to change the way one perceives moving image works and gave participants a chance to present themselves through the medium of film in the context of a dark cinema space. Now that the Film Salon has come to an end, best-kept secrets can be revealed to a wider audience.

My first guest was Sarah Jones, whose performance ITIT (2010) was selected for BNC 2012, started her presentation with a fictional dialogue between herself and the filmmaker Peter Hall. Notions of the role of the script and adaptation were then explored in the Hall’s The Homecoming (1973). Jones’ brilliant performance and the film exposed what is ordinarily unspoken. The position of a water of glass, the length of a pause, the choice of choreography – a mise-en-scène so to speak - proved to convey volumes. The combination of dramatic and cinematic devices in Hall’s film were echoed in Jones‘ presentation, and suggested connections between language and the nature of dramatic storytelling.

The next Film Salon belonged exclusively to ICA Student Forum participants. Stella Bottai, Daria Khan, Ned McConnell and Jessica Vaughan - all of whom are currently RCA Curating students – first presented a selection of films that took as a point of departure an exploration into elements of spontaneity and the artifice of body language in relation to urban, social and technological apparatuses of contemporary society. The friction between the mechanical and organic nature of the human body was explored in the film programme Still Moving, which included filmmakers such as Daria Martin, Henry Hills, Józef Robakowski, Miranda Pannell, Wendy McMurd, Jorgen Leth as well as duo John Wood and Paul Harrison. The screening, which made everyone in the audience particularly aware of their own bodies sitting in the dark room, was followed by a presentation by the second project group – Jane Scarth and Pimlott Seth. Their choice of Liz Borden’s legendary Born in Flames (1983) coincided with ICA’s current exhibition of See Red Women's Workshop – a UK collective, which between 1974 and the early 1990s ran a sustained campaign of feminist interventions that explored the role of women in society.

The third Film Salon offered a chance to get to know Lauren Godfrey and Jack Brindley, both BNC 2012 artists. Godfrey presented a selection of YouTube clips involving people eating spaghetti: Buster Keaton and Fatty Arbuckle’s Devising Ways to Eat Spaghetti, Goodfellas’ spaghetti di prigionieri, and watching Julia Roberts relishing spaghetii bolognese on a Roman piazetta whetted everyone’s appetite – even those who came for the screening full. Who would have expected that real spaghetti dish would be served in ICA studio at the end of the night? But before that Jack Brindley together with Tim Dixon revealed the secrets of their open-file archive. The presentation of Tom Smith’s The future hasn’t been written yet (2010), Ivan Argote’s Untitled (New York) (2010), David Raymond Conroy’s Hauling/It is not the past, but the future, that determines the present (2010/2011), Jamie Shovlin’s Hiker Meat (Intro) (2010) and Trisha Baga’s Peacock (2011) was the first of many events organised by open-file – a platform that investigates in how relationships between artworks, performances, and writing can be collected and generated to fulfil a curatorial remit, and how they can subsequently be dispersed.

The final Film Salon was hosted by Anita Delaney, whose video work Untitled (Ready for a Fight) (2011) was included in the show, and ICA Student Forum member Sylwia Serafinowicz,. Anita Delaney’s selection of Paul McCarthy’s Ma Bell (1971), Dan Finsel’s I Would Love Farrah, Farrah, Farrah (2009) and Stanya Kahn’s Who Do You Think You Are (2012) explored the aesthetics of anxiety and how this concept may be relevant to the contemporary moment, particularly in the light of economic anxiety and labour conditions. Two films chosen by Serafinowicz followed this selection: Nicolas Wagnieres's Hotel Jugoslavija (2006) and Martin Ginestie’s Robin Hood Gardens (Or Every Brutalist Structure For Itself) (2010). Each of these films explored architecture as a mirror of political and social changes. It was an interesting screening particularly in the context of the corrosion of London’s council estates as well as recent privatization issues of Carpenter’s Estate in Stratford during the 2012 Olympics.

The BNC 2012 education programme proved enormously popular and attracted a broad set of participants to the ICA after hours. Artists are not only given an opportunity to exhibit their works in this group show, but also to contextualise their practice and lead in the development of accompanying programmes. The Film Salon, which I had a great pleasure to coordinate and curate, was one result among many provided by participation in the show: Lauren Godfrey’s On Language, Sarah Jones’ performances and Jack Brindley’s Open File: Long Live the New Flesh night of performance and installation enriched the programme and showed audiences just constitutes a New Contemporary.

Submissions for BNC 2013 are now open until 18 February. I am very much looking forward to what the next group make of this critical platform for graduates.