The Trouble with Populism 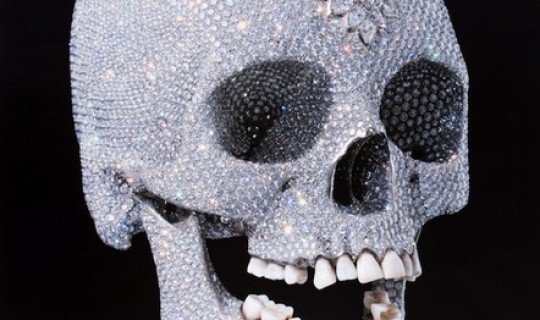 For the Love of God, The Diamond Skull, 2007.Silkscreen and glazes on paper with diamond dust.100 x 75 cm, Edition of 250© Damien Hirst and Science Ltd. All rights reserved, DACS 2012 Photo credit: Courtesy of Other Criteria

The opening ceremony for the Olympics embodied tensions that are central to contemporary British cultural debate. Simultaneously playful and earnest, mainstream and subversive, "high" and "low", it satisfied a nation of cultural omnivores. But what are the challenges that our public cultural institutions currently face in attracting and stimulating audiences? Melanie Gerlis, Jude Kelly, Bob & Roberta Smith and Sally Tallant debate these issues in our latest 'Trouble with...' panel discussion.

Melanie Gerlis has been art market editor of The Art Newspaper since June 2007, prior to which she worked as a book reviewer and art market writer for the paper for a year. She previously worked for ten years in investor relations and financial public relations for the City of London firm Finsbury where she advised clients including the investment bank Merrill Lynch, the private equity group Permira and hedge fund managers GLG Partners. She also lectures at Sotheby's Institute and Christie's Education.

Jude Kelly has been Artistic Director of the Southbank Centre, London since 2005. Kelly founded Solent People's Theatre, a touring company in 1976, and was artistic director of the Battersea Arts Centre from 1980 to 1985. In 1986, she joined the Royal Shakespeare Company. She later became the founding director of the West Yorkshire Playhouse from 1990–2002, where as Artistic Director and then CEO she established it as an acknowledged centre for excellence. Amongst her many successes as a director, Jude’s production of Singin’ in the Rain transferred twice to the Royal National Theatre and was awarded the Laurence Olivier Award for Outstanding Musical Production in 2001. She directed Sir Ian McKellen in The Seagull and The Tempest, Patrick Stewart in Johnson over Jordon and Othello, Dawn French in When We Are Married, and the English National Opera in The Elixir of Love (Southbank Award - Newcomer Opera) and On the Town, their most successful production to date.

Bob & Roberta Smith is the pseudonym used by the artist Patrick Brill. He is particularly well known for his painted slogans and sign-posting works, but he has also made sculptures using cement, performed as a musician and acted as a curator on a series of public art projects on the Thames Gateway in Essex, UK.
As Bob & Roberta Smith he has participated in numerous solo and group exhibitions, including at the Hayward Gallery, London (2010), the Whitechapel Gallery, London, UK (2001 and 2011), Pierogi, New York, USA (2002 and 2012). His latest solo exhibition opened at the Hales Gallery in London in October 2012.

Sally Tallant is the Artistic Director and CEO of the Liverpool Biennial. She was formerly Head of Programmes at the Serpentine Gallery, London where she was responsible for the development and delivery of an integrated program of exhibitions, architecture, education and public programs. Since 2001 she developed an ambitious program of artist’s projects and commissions, conferences, talks and events. She regularly contributes to conferences nationally and internationally, as well as being a Trustee of the Chisenhale Gallery and the External Examiner for MA Fine Art at Central St Martins.

The Trouble With Painting

The Trouble with Productivity