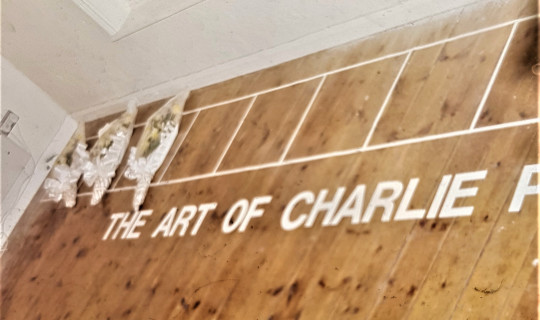 Early on in my research - as PhD candidate at Nottingham Trent, in partnership with Bloomberg New Contemporaries - I was put in touch with artist and curator Mike Collier. Mike was a past student committee member who led the organizing of the show in 1976, shortly after it was renamed from Young to New Contemporaries (NC) in 1974. I went to visit him at his studio in Newcastle, and we spent several hours talking about his participation and discussing what is it about NC that has enabled it to survive over the last seven decades and why, even though we are unable to name exactly what this is, it remains so important today?

From my introduction to the history of New Contemporaries (NC), my reaction was much like many others I have spoken to since: surprise at the duration of the NC programme, celebrating its 70th anniversary in 2019, and amazement at the sheer volume and network of artists who have participated. Established in 1949 as Young Contemporaries, for the first four decades it was run purely on a voluntary basis by art school tutors and students. Focusing on a large London exhibition the initial programme exhibited over 400 artists and approximately 500 art works. It has always been closely supported by the Arts Council, who would tour a selection of 30 – 45 artists from the London show around the UK every year, as part of their strategy of bringing contemporary art to the ‘provinces’. By the 1980s, the number of artists selected for the London exhibition had reduced to around 150 – 200 artists, and the Arts Council Touring programme had lagged. After undergoing a major review in 1986, the exhibition was relaunched into the oganisation we are familiar with today. Looking to decentralize from London, our contemporary NC is actually much closer to the early Arts Council Touring in format and size, exhibiting between 30 to 60 artists each year in major cities across the UK.

At the time Mike became involved he was a Masters student at Goldsmiths. He ended up dedicating almost a year out of his studies in order to set up the exhibition at the Royal Academy and was behind a new initiative for alternative practices in partnership with Acme Studios. While we think of NC with the understanding of it being representative of the very newest practices – at the forefront of innovation – at this point it was still only a painting and sculpture show, despite earlier interventions to include sound, light and moving image works. The rise of conceptual and performative works in the 1960s had taken hold, but this practice was still very much on the fringes of art education, and even the tutors, who were actively involved in the contemporary art world, were not entirely sold on including this type of work within the NC exhibition.

As our conversation travelled back and forth around NC then and now, practice developments and the particular ‘rite of passage’ that marks the transition from art student to artist, the complex and entwined nature of NC as sitting between arts education, the art market and the cultural arena came to the fore. Over the decades it has witnessed the journeys of so many artists – some who only dabbled briefly in the medium presented within the NC show, some whose last work was exhibited there, some whose ‘not so great’ work became the start of a long and enduring career.

From Mike I was directed to Terry Duffy, and from there to the Acme Gallery who had original copies of the Live Show catalogues from ‘77 and ‘76. Terry also had six photographs, these are the only photographic documentation I have found so far. Terry is not sure what they are of apart from a few of his own work. Despite doing my best to cross-reference, only one is clearly ‘name-able’, as handily the artist had titled his work within it. The photograph crops the last bit, ‘The Art of Charlie...’ , but Terry also remembered that the Charlie Process installation was the laying out of a fresh bunch of flowers for each day of the exhibition. The remaining images could be from either year and be any number of works. Typing up the list of artists, I started realising further connections for these two shows: I had worked at Duncan of Jordanstone College of Art and Design with Elaine Shemilt; I had met Terry Shave earlier in the year in Nottingham; and Dick Jewell happened to be currently exhibiting at Bonington Gallery, attached to my home university Nottingham Trent; I had even shown Jenny Okun’s Focus II, the follow up to her 1977 Live Show entry, as part of my Masters exhibition in 2016. This emergence of connections and networks seems to happen each time I dive into any area or year of NC, often emerging slowly with a resulting ‘oh, how could I have missed that?’ 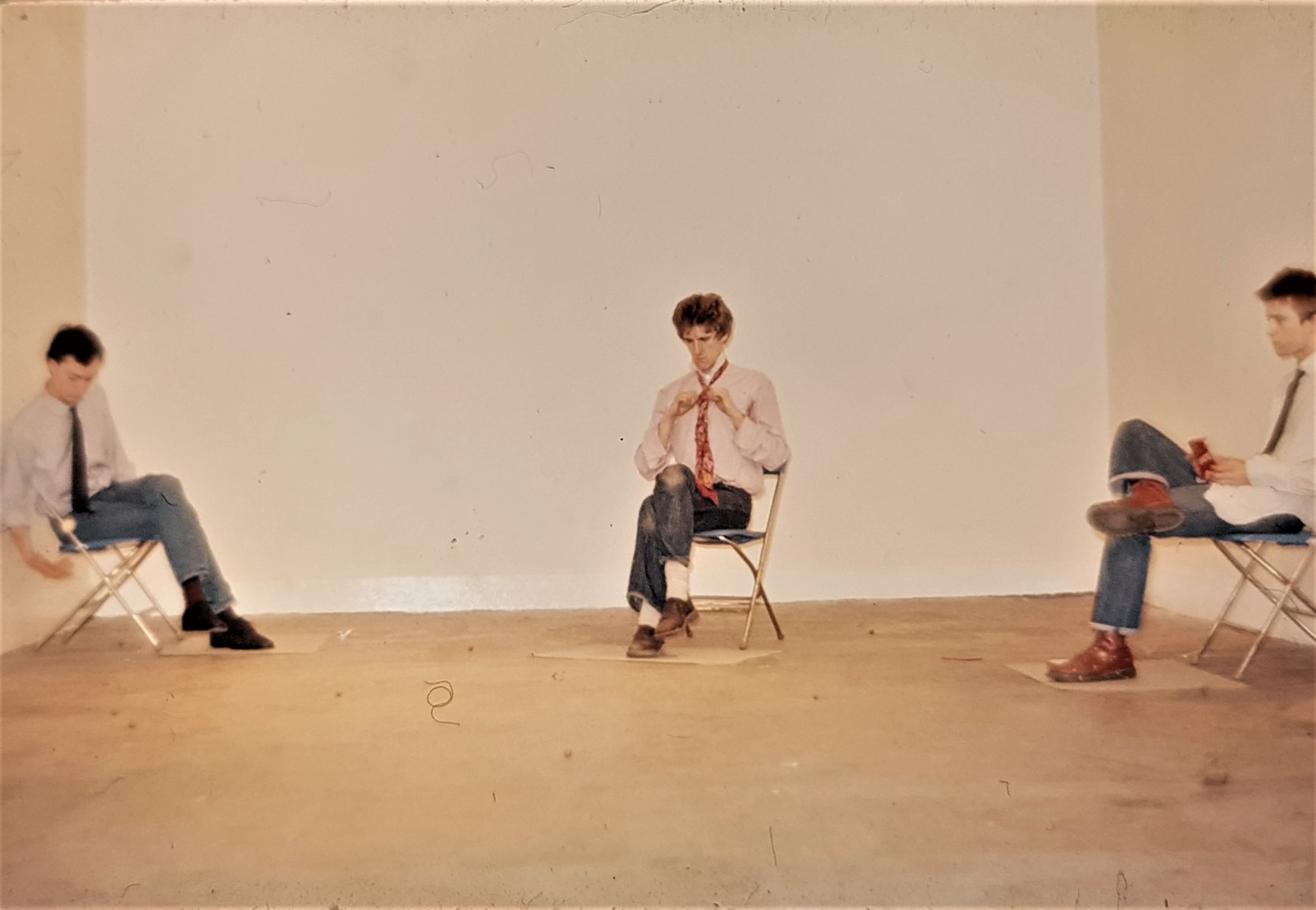 Part of this slowness in ‘joining the dots’ would be inevitable even with full records at my disposal, but particularly for NC looking into their history is problematic. The period of being run by rotating committees between 1949 to the mid-1980s means that each year it was much like re-inventing the wheel – records and information were rarely passed on or preserved, and the practice of photographic documentation of the works or the exhibition is only a relatively recent phenomenon. The most consistent records for this period relate to the Arts Council England touring show, which are held by the V&A. The ICA also kept some records relating to the shows they hosted in the late 70s/early 80s, but any further records are scattered amongst the individual hosting venues, past participants and organisers - which any good archivist would readily point out, does not constitute an archive. So where to go from here?

I wanted to see what it would look like if I were to gather all of the things I could find in one place: could this begin to look like ‘an archive’? The answer was not quite yet. Seven decades of activity was obviously a tall order, but focusing on the two years of the Live Show was a possibility. Acme had copies of both Live Show catalogues, programmes and posters; Boots Library had a copy of the Studio International review of the exhibition, and I had the ‘mystery’ photographs from Terry Duffy. Supplemented by the oral history interview transcriptions with Mike, Terry and Terry, Not a Live Show was presented as part of the Vitrines programme at Bonington Gallery at NTU. I continued to build on the research during the exhibition, with the spreadsheet of information up on the wall and handwriting the extra information I uncovered during the month it was on show, but this remained quite sparse. I managed to track down some images of the work by Elaine Shemilt, Dick Jewell and Reindeer Werk, but the powers of the internet didn’t manage to bring many more to light. The catalogue for 1976 was fantastic. As described by Mike, it was made up of individual photocopies of the artists’ proposals and included submissions from artists such as Marty St James and Antony Gormley. Many of the concerns addressed in their work echoes commentary you may hear from art students today – trying out new materials and formats, experimenting with the expanded field of sculpture and performance, and playing with concepts of time and identity through moving image. Unfortunately, the catalogue in 1977 reverts back to the quite opaque name, school and item listing format. 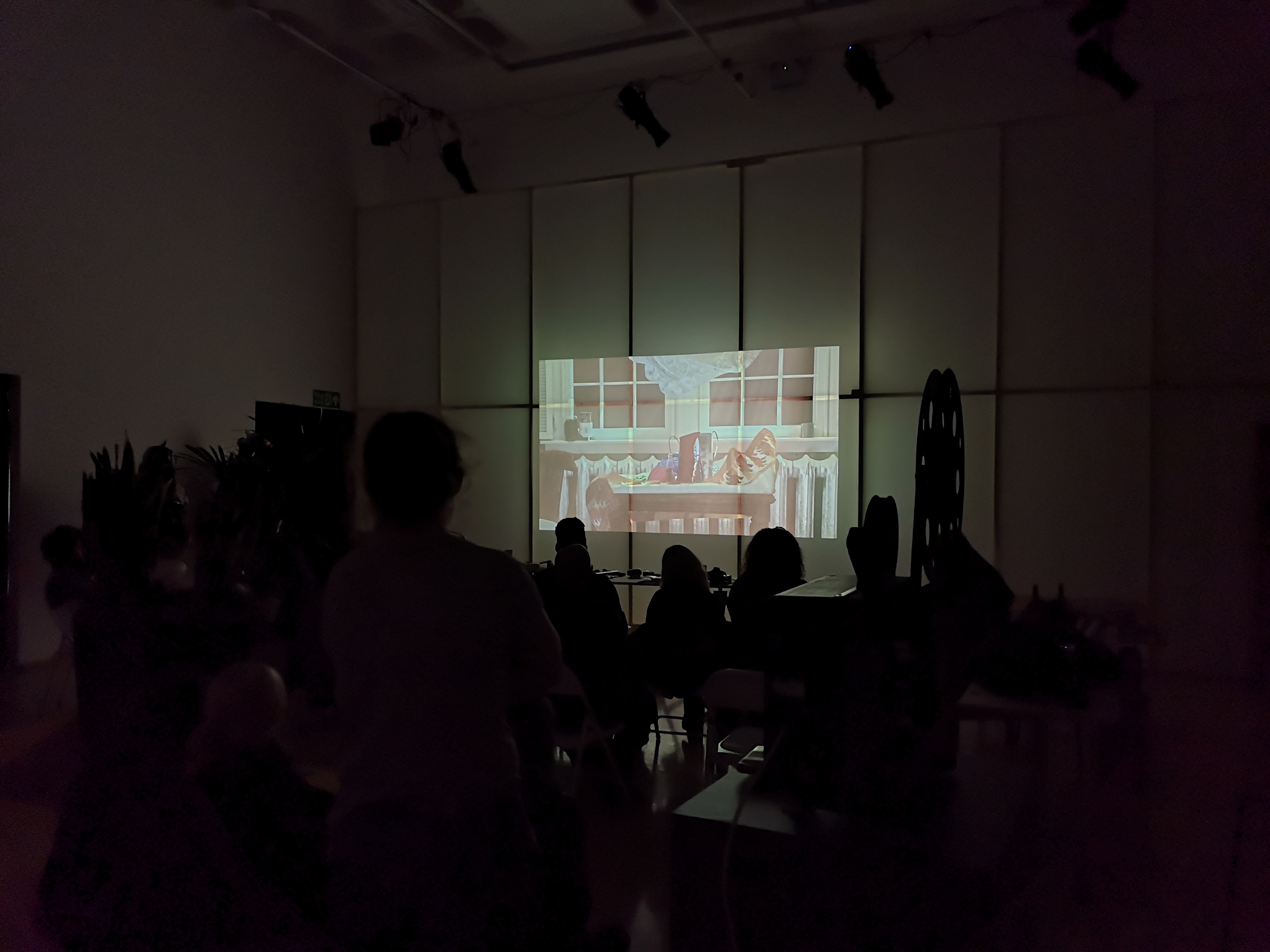 As part of the display I also wanted to bring back some of the energy that must have been circulating around the original shows, so following their example I arranged an evening of film screenings. Alongside Helen Chadwick’s Domestic Sanitation and Terry Shave’s Postcard were seven films by current students and recent graduates. Playing back to back, Terry Shave’s 16 mm animation made by photocopying a postcard a thousand of times next to recent NC artist George Stamenov’s digital manipulation in Dolna Dikania made a stark contrast, but both were focused on pushing and playing with new technologies. Chadwick’s Domestic Sanitation was the documentation of two performative works, Bargain Bed Bonanza and Latex Glamour, and while the subjects were different, there was a quality of the experiential that was echoed by Molly Bouch in her performance Haha and short film How to Laugh. This conversation between the past and present is one that seems to embody our particular moment of contemporaneity, and for an organisation built on projecting what is ‘about to be’ the value of these dialogues extends far beyond the ‘sum of its parts’, as said by Andrew Forge in the foreword to the 1962 Young Contemporaries exhibition:

“The Young Contemporaries is an arena much larger than the sum of its parts... Hence the show’s brilliance, a quality that one finds nowhere else in mixed exhibitions at all. Hence too its mystery; the tantalizing quality that is the hallmark of a brilliant one-night stand. Who [painted these pictures]? Where are they going?”