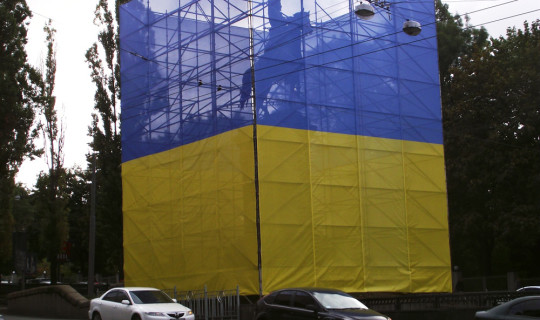 Briefly speaking, I make work in which acts of violence, authority, patriarchism and the like are explored through sculptures that reference public statues and other expressions of power.

And it was all going good, and I was having fun. Things were going just fine, until a few weeks ago when I was in Kyiv, fuck me, everything I thought I was doing has been… is being… done there many times better than I am doing. Not in some sanitised aesthetic form, perfectly prepared for the lifecycle of an artwork; create, package, exhibit, sell, posterity. The forms of protest that are made upon statues are real. They are not actions of aesthetic consideration, they are done because they mean something. It is in the here and now. It is active. Protest through material gesture, in real time.

I spent a few days in Kyiv and stayed in a cheap city centre sparse hotel. Right outside stood a monument to the Russian commander Nikolay Shchors, now curtained up with the national flag. Such a simple act, a successful shift between viewer and object, it is everything I am trying to do, a perfect little fuck you! Better than I am trying to do, because it clearly mattered. It was alive. It was active.

I giddily ran off to my friends to find out more, to mine them for thoughts and opinions. I was surprised so many people were against such a public act. Friends who had taken part in Maidan, whose families were directly affected by the consequences of war were, often, not so keen on such a public act. How come? You can’t just cover up history, no matter how unpalatable or uncomfortably it sits with current opinion. It is part of the narrative that brought you to the place you are, at that moment. Covering up this equestrian bombast, this Soviet soldier who ‘conquered’ Kyiv only serves to edit and alter history. It is not an act of the people to make these gestures but of the new powers that be. It is a gesture to assert their new authority. To literally cover up the past. And you know who used to be good at selective history… The Russians.

So maybe then it is better to consign these monuments to the past and leave them be. Maybe then a gallery is a more appropriate place to make fresh, considered statements. Staged and choreographed vandalism perhaps has its merits.

I am still none the wiser.