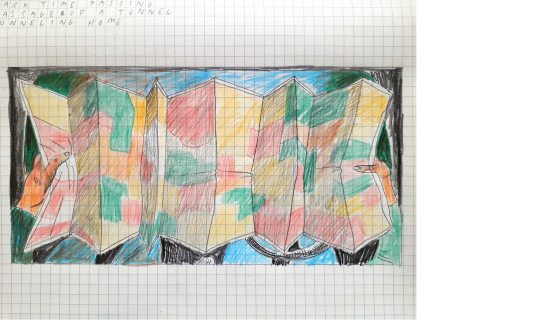 Jack Sutherland, The Map Readers or: Every Good Horror Film Starts With A Journey

A car winds its way through a forest road. The camera follows the car and the road and pans up to seek out the horizon. What is held at the destination? Has something been set in motion that cannot be stopped? “Every Good Horror Film Starts With A Journey.” I can’t remember where or when I first heard this catch-all generalisation about the genre of horror, but it has stuck with me. I like to toy with a wilful disregard for correct and thorough research; to play with the putty of petulant acts of micro-rebellion that involve not looking too deeply into something. It’s found a way into my brain, and the more I repeat the phrase the more real it becomes. It doesn’t matter if it is in no way related to the truth.

I’m thinking about journeys and anticipation and horror as I sit and draw and write in preparation for a new series of paintings that revolve around car interiors. I’ve reached my thirties and I’m more squeamish than ever, so horror bites even more sharply.

The horror of the unknown;

The slow horror of going through a journey;

The cement-set horror of not wanting to change or not being able to change quickly enough.

I don’t drive but I cycle. I don’t drive but I take the bus. Tons of metal hurtling around at great speed being controlled by people with as little attention span as me, There’s the horror! And yet I am still drawn to the romance of a car journey. An imagined romance of leather and polished wood and the open road. I’ve only seen Easy Rider once…

I am drawn to maps so I have drawn a map. Unfurled and limitless...but no, not limitless - there is a defined edge there. Is that the attraction? A world to play in with known borders. The borders hint at what could be next though. A contradictory love for the limited and known and the limitless and unknown. Games of all sorts litter my memories. Board games with maps and quests, video games with maps on glossy paper that have only just had their creases pressed. I feel like I enjoyed unfolding those pieces of paper more than the implied journeys that were held within.

Painting has become more and more of a journey for me over the last few years. I used to have a more fully realised image of what the painting would look like. I could hold it in my hand and reach the destination without too many stops or course corrections. This is no longer the case. I am still learning to embrace the haziness that painting can offer. To peer into the puddle, to plunge my arm elbow-deep into the muddle. There is humour and drama in a rhyme, in a piece of wordplay, in a looming plume.

In the drawing is a map of Colorado. Border lines and blocks of colour work wonderfully well as an abstract painting, with all other distinguishing information pushed to the edges. The centrifuge has been spun and limbs and scenery are forced to the outskirts, with our Coloradan abstraction taking centre stage. Is the centre the most important part of the painting? Is that where the purest distillation of thought and intention can be found? Can this be applied to other things? Is the centre of an apple the most apple-y part of the apple? The geographic centre of the contiguous United States is in Lebanon, Kansas. The state to the east of Colorado contains the very middle of the country. Is this the “most American” part of the world? Are people who live there affected by the sheer mass and volume of America around them? Political opinions, culture, time, they all swirl around this little Kansas pinprick. Colorado rotates on the event horizon, left of centre and all the more interesting for it. I picked a map of this area of the world to use in the drawing because Colorado houses the Cheyenne Mountain Complex (where the North American Aerospace Defense is located, deep within its complex series of tunnels and bunkers) and because situated there is a place called Boulder.

Oh the horror of living in a place named after a big rock. I’ve let my membership to the ‘Meeting of Little Rock (AR) & Boulder (CO)’ expire. I got too distracted on my journey by what size rock I would find in the centre of these two places.