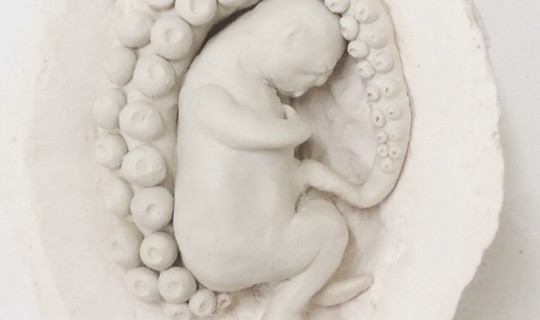 I’m sitting in my studio at Sarabande thinking about a body with no borders. Uncontained, its curves and edges as mutable as clay. Formless, malleable flesh entirely unstoppable in its liquid-like state. As if caught in a continuous mode of becoming, shapeshifting, appropriating hybrid forms. The body swells and contracts and every so often, like a dam bursting, it dilates to a point of eruption, unleashing the boundless river of chaos that resides within. A relentless flow of passion, consumption, temptation and desire. The visceral sound of its rushing waters refusing to be silenced. This water does not serve to purify, it endeavours to submerge, it is a bodily overspill that cannot be staunched.

Society and culture have taught us how to train our bodies to contain these spills, to prevent them from slipping back to their unruly, primal state. As nature and land have been plundered and conquered by man, the animals within us have also been stifled and tamed. The wild woman of the past has been hunted and domesticated to a point of extinction.

I often find myself wondering about the various bodies that inhabited this studio before me, the thin veil of time that exists between myself and its previous dwellers. In Victorian times it was workhorses that resided in this space, which were former stables. I imagine their musky scent, the thud of hoof on hay as they rustle and shift the great weight of their bodies around the enclosure. I wonder when this distance in our relationship towards animals unfolded, when these beasts suddenly transformed into machines worthy of labour.

My gaze drifts across the abundance of sculpted bodies that fill my studio space, a celebration of feminine flesh. A small foetus is curled up within the crown of a plaster skull. Isn’t it strange how the womb and the skull embody such similar spaces? Both serving to protect - brain and unborn baby. A tentacle garland functions as an umbilical cord binding the foetus and body, creating a link between the amorphous flesh of a mollusc and the transformative maternal figure.

A clay pig sits atop a shelf parading her bare body, her trotters adorned with stiletto heels. She personifies but also mocks the notion of female lust as being hideous and corrupting. Her hybrid body represents a break in boundaries between human and animal, allowing a return to its primal state. She laughs in the face of livestock and challenges the gaze of the viewer, demanding to be considered as more than just meat.