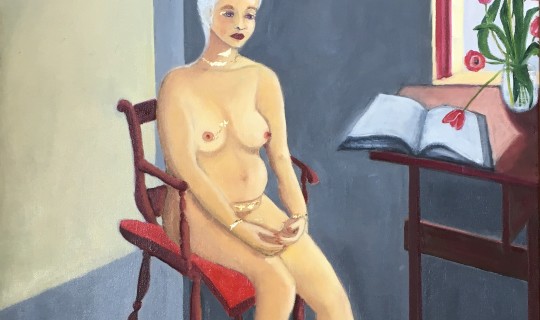 Whoever heard of a 66-year-old emerging artist?

I was fascinated by the stories I heard in Brenda Emmanus’ and Sonia Boyce’s documentary ‘Whoever Heard of a Black Artist?'. I am a 66-year-old British woman of Indian descent who has given up a career in academia because I had hit the proverbial glass (or in my case, concrete) ceiling of Associate Professor in Mental Health in order to undertake an MA in Painting. I thought to myself, “what chance have I of becoming a well-known artist?” So, I was delighted to have been chosen as one of the Bloomberg New Contemporaries 2020.

My role model is Yayoi Kuama, a Japanese artist who at 91 is still painting. The fact that Kusama is Japanese is significant. I sometimes wonder if in some previous life I wasn't Japanese myself. There is a simplicity and an elegance about the Japanese spiritual aesthetic that I find compelling: life is imperfect, impermanent and incomplete. These are the cornerstones of Zen Buddhism, more particularly Wabi-Sabi and they are to be found in the Christian mystics too like Meister Eckhart, Julian of Norwich and more recently, Anthony DeMello and Richard Rohr.

What was the origin of Wabi Sabi? The story goes that Sen no Rikyu was a Buddhist monk in the household of General Hideyoshi, a man of some standing in 16th Century Japanese society. Rikyu was disquieted by the fact that the Japanese tea ceremony, which was meant to be an act of meditation, of being totally present in the now, had become an empty ritual, the monopoly of the rich who used it to display status and wealth via the ornate, gold- embossed tea utensils sourced from China that they used for the ceremony. Rikyu instead began to use rustic, locally made, unadorned tea utensils, thereby restoring the Tea Ceremony to the common people, thus gaining a massive following. Hideyoshi hated the raw aesthetic propounded by Rikyu and, it is said, became jealous of Rikyu’s popularity. So, he ordered Rikyu to revoke his aesthetic and his beliefs or commit hara-kiri (ritual suicide by disembowelment). Rikyu chose suicide rather than give up his belief in rustic simplicity, directness of approach and honesty of the self—all of which were embodied in wabi-cha or the Tea ceremony.

I asked myself: “How can I embody rustic simplicity, directness of approach and honesty of the self in my art?” I chose the very early morning, 6 a.m., as the time to quieten and centre the soul in simple acts of meditation. I chose sketchbooks as my canvases and sharpies as my paint brushes, and I began to create. Using the Buddhist concept of ‘beginner’s mind’, I faced an empty sketchbook page every (or nearly every) morning and waited for an image to emerge. Sometimes I merely recorded my surroundings, painting the scene outside my bedroom window, or within my bedroom, or within my home. Other times I was attentive to the emotions rising within me or ones that I experienced within my clients (I still practice as a psychologist). I now have over 200 6 a.m. paintings. Themes that have emerged focus on ageing, sexuality, spirituality, politics, relationships and emotions such as depression, anxiety, sorrow, anger and loneliness. I am often riskily autobiographical because I want to embody the spirit of Wabi Sabi’s directness of approach and an honesty of the self. I painted and painted, like Yayoi. So, each sketchbook sheet is now part of a changeable, moveable tapestry of 6 a.m. paintings.

Another Japanese concept that fascinates me is Kintsukuroi, the Japanese art of mending broken ceramics with gold such that the value of the mended piece is greater than that of the original. As a philosophy, it is seen as similar to Wabi-Sabi, which embraces the flawed or the imperfect. Not only is there no attempt to hide the damage, the repair is highlighted and celebrated as part of the history of the object. This concept touches boundaries with Object Oriented Ontology. 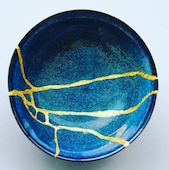 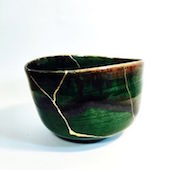 Ceramics that have been mended with gold

I created the work Kintsukuroi 1 (shown below) while socially isolated and alone in Lockdown. In the image, both dinner plates have been broken and mended with gold. The second plate and champagne flute indicate an unseen presence that ameliorates the social isolation of Lockdown. It was April 2020 and the tulips were out. This oil painting is painted in colours that produce, I hope, an uplifting of the spirit. 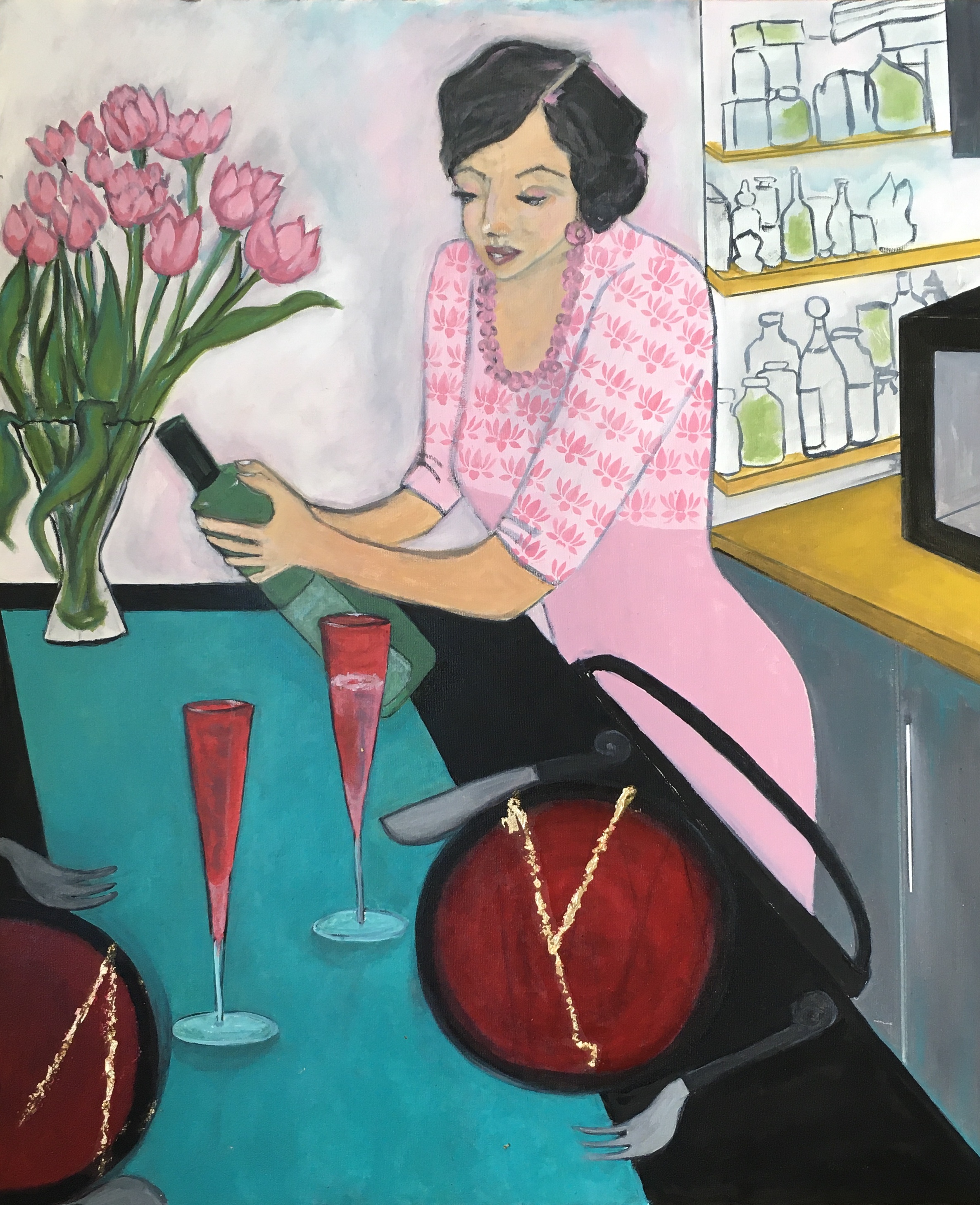 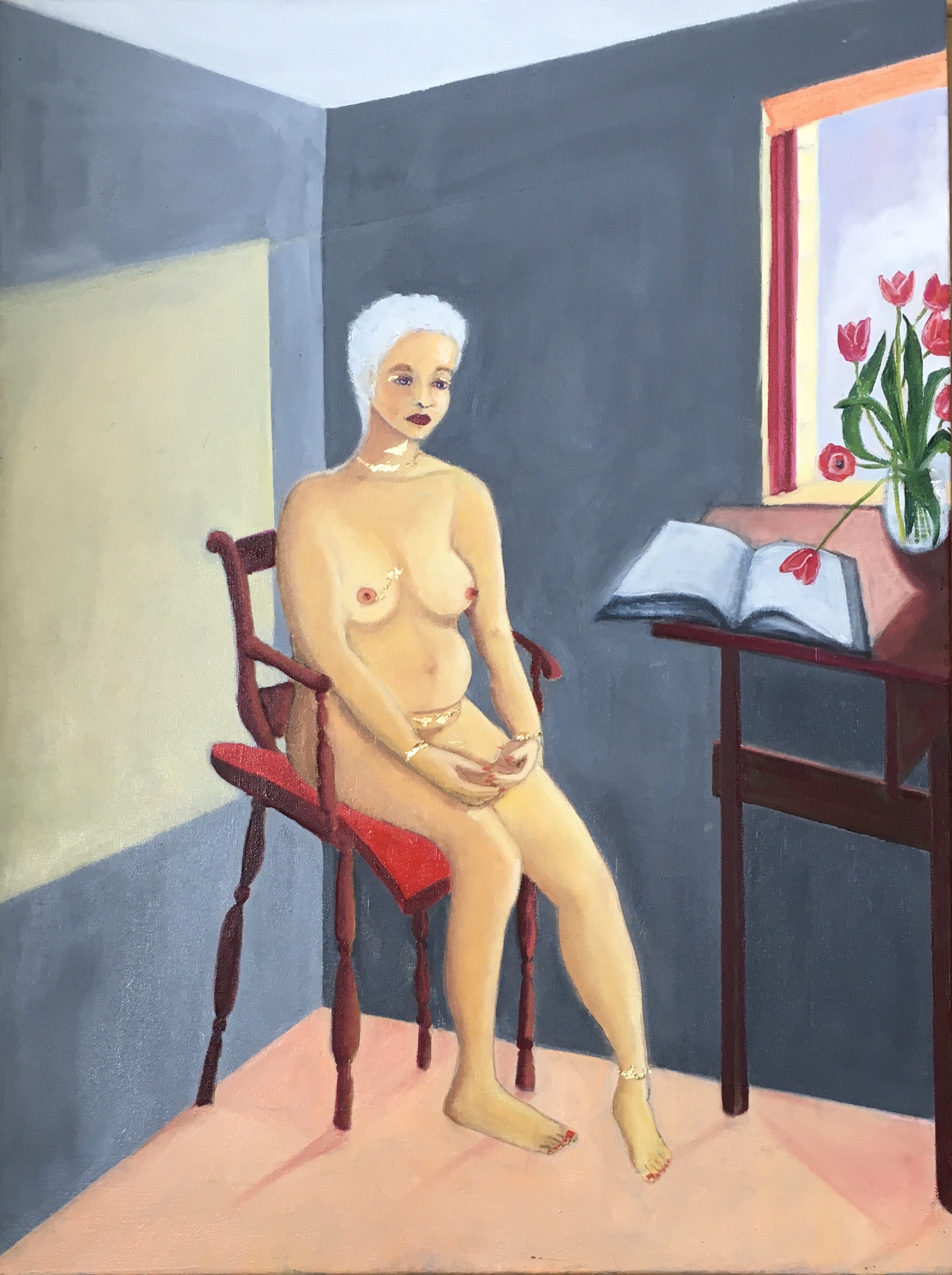 Using Kintsukuroi 1 as a metaphor and my own history of encounters with hospitals, I have painted Kintsukuroi 2, which depicts a woman in the act of meditation. Her body has been invaded by numerous surgeries: cataracts in her eyes, a tonsils operation, an operation for breast cancer, the evidence of children born by Caesarean section, two broken wrists and a broken ankle. Each symbolises a story from which beauty in gold has grown.

I wonder if my being at the other end of the life span, with many decades of life experience behind me, has anything to do with my fascination with the elegance and simplicity of Wabi Sabi and Kintsukuroi. I see an unusual confluence of spirituality, philosophy and psychology as they meet in art. I wonder if you can see it too?