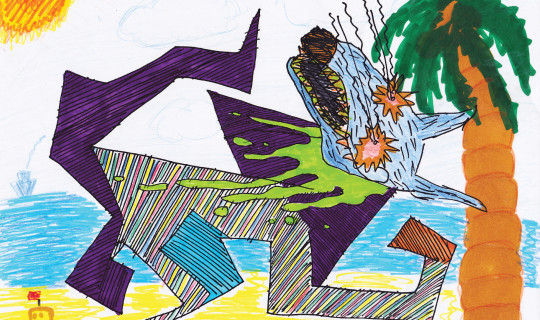 Now where was I? Ah, yes: Everyone I’ve ever known and loved is dead. I live in a cave. I was abandoned as a child. I’m gluten intolerant. I’ve been drowned at birth, impaled in infancy, blinded in adolescence and ceaselessly castrated, maimed, slow-cooked and slaughtered in my middle-age. Now I’m on public display in Liverpool for one month (The World Museum, 20th September to 26th October, 10am-5pm daily). Well, enough is enough: EUTHANISE MY WRETCHED, IMMORTAL SOUL! Liverpool- a city built on the lies of fascist hippy-dom. Let it be, let it be, let it be, let it be…look at what happens when you let it be!

…but the contract was signed. I forced a grin as I was dutifully applied to the wall in thick black gloss. An anaconda from the nearby ‘Sssnakes Alive!’ exhibit looked at me with a condescending jeer. “Mock all you like, serpent!” I said, “but neutrality’s a no-go, inculpation is ineffectual and purism’s for pussies”. He looked nonplussed, “In other words, ninnyhammer: I’m the product of this priggish, pig Society and I mean to go out with a bang.” He slithered away warning me of a recent failed uprising in the north.

The canapés arrived, followed by the press- I ate them all.

As for the show itself- childish! Mounds of Play-Doh and sand castles were interspersed between TVs (presumably to stave off the boredom). The crowd seemed sedated enough by it, instagramming the hell out of me and my neighbours, whilst gawping at the mechanics of my anatomy. I spat out more and more vitriolic hatred at the horde, who – much to my bemusement and disgust – applauded my every syllable.

It was all going to shit until Mayor Bloomberg himself turned up. I set my phasers to semi-automatic and fired at the snake pens, unleashing reptilian ruination. I took the Mayor to one side and announced the Cultural Revolution.