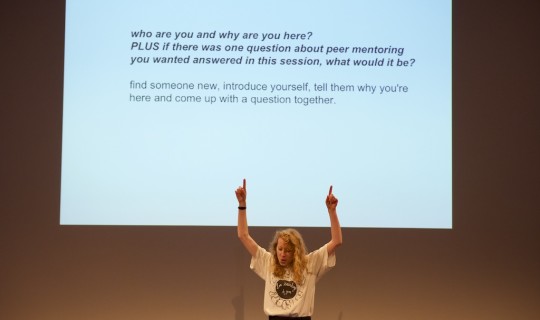 This talk and participatory session is led by artist and peer mentor, Chloe Cooper. Cooper will introduce the practice of peer mentoring and its benefits, suggesting ways to establish groups and models of feedback. As part of the session attendees are asked to share their practice within a small group.

This talk and practical session will:
- Cover some of the potential benefits of being part of a peer mentoring collective.
- Consider different approaches to establishing a group.
- Suggest models and techniques for providing constructive feedback on each-others practice.
- Look at the practical considerations in setting up and running a peer mentoring group and initiate the first steps with session attendees.

Please bring an example of an artwork that is in development. It could be a photograph, a video on a phone, a hand held sculpture, a drawing in a sketchbook, a set of gestures from a choreography or a section from a performance to perform live.

This session is programmed by Artquest in partnership with New Contemporaries.

Chloe Cooper works with people in places to bring about some kind of change. She uses performative tours, lectures and instructional videos to propose something quite improbable to be worked through together. Often combined with Chloe’s participation in critical forms of art education in museums, galleries and schools, these performances look for alternatives to existing ideas, forms and knowledges. Chloe has been part of a Live Art peer support group since 2008, co-led peer mentoring projects in 2009 and 2010 in association with Live Art Development Agency, Camden Arts Centre and Zabludowicz Collection and is currently leading practice sharing alongside the Learning team at Tate.