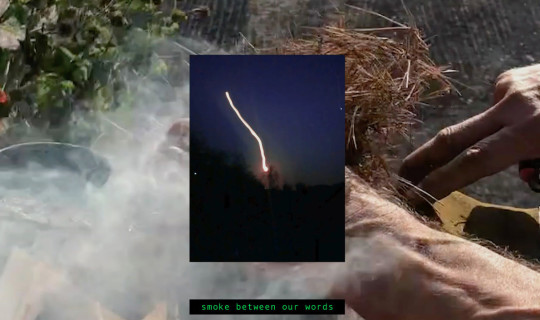 An online event of readings, moving image, audio and performances by a number of the artists selected for New Contemporaries 2020 who, in various approaches, are working with writing as part of or central to their practice. Literature, performance writing and spoken word are increasingly popular forms for contemporary art practice, yet are often challenging to showcase in exhibitions. This programme aims to support and publicly present experimental writing by a diverse group of emerging artists.

Each artist will introduce their works followed by a live streaming of new audio and moving image works that have writing at their core.

Check out more of the artists' work:

Zethu Maseko's work explores ancient and contemporary mythology in relation to identity. She practices indigenising her internal and external conversation around the human experience, specifically in relation to water and interconnectedness with the land. She works across performance, film, costume, tapestry, sound and often delivers workshops. Zethu describes herself as a Cultural worker, artist, curator and is founder and practicing member of North London Creative Resistance. She graduated from Goldsmiths, University of London in 2020 with a First Class BA (Hons) in Fine Art and on graduating was awarded the Nicholas and Andrie Tooth Travelling Scholarship and selected for New Contemporaries 2020.

Rene Matić (b. 1997, Peterborough) is an artist currently working in London. Their work brings together themes of post-blackness, glitch feminism and subcultural theory in a meeting place they describe as rude(ness) – bringing to light (or dark) the fated conflicts and contradictions that one encounters while navigating the world in a body like their own. Matić’s research reaches back to post-war Britain and the survival tactics and ‘tap dances’ of Britain’s Brown babies. They take their departure point from dance and music movements such as Northern soul, Ska and 2-Tone. Matić’s current work predominantly explores the Skinhead movement, its founding as a multicultural marriage between West Indian and white working-class culture and its subsequent co-option by far-right white supremacists. They use this as a metaphor to examine their own experience of living in the Black British diaspora, to excavate white jealousy, the continued legacy of colonialism and the fear of a Black planet - all things which find convergence within and upon their mixed-race identity.

Sophie Ruigrok is an artist working in drawing and painting, and is currently exploring sound. She graduated from The Drawing Year at the Royal Drawing School in December 2019, and has since been selected for New Contemporaries 2020. In 2020, she exhibited in London and Amsterdam and took part in a residential programme at ecological co-op, Montemero, in Almería, Spain. Throughout 2021 she will be an artist in residence and community facilitator at Proposition’s Studio’s Eco-Syntax residency in Derbyshire, UK. Sophie writes art criticism and has contributed to frieze, Apollo, Dazed, Elephant and thisistomorrow.

Anna-Rose Stefatou (b. 1996) is a Greek-British interdisciplinary artist; she primarily works with moving image and writing. She completed a BA Fine Art at The Slade School of Fine Art in London (2019), during which she took a semester abroad at The Academy of Fine Arts in Vienna (2018). In her work, poetics and ecology merge through imagery that traces itself back to both cosmic and personal memory archives; the entanglement of time, light and memory is at the centre of her practice. She looks into the landscapes of kinship between human and more-than human beings, through slippage and rupture.

Ahren Warner writes, makes films and takes photographs. Recent work has included the book and film The sea is spread and cleaved and furled (Prototype, 2020) and a book of poems and photographs, Hello. Your promise has been extracted (Bloodaxe, 2017). His work has been exhibited at venues including the Nikola Tesla Museum (Zagreb), Centro de Cultura Digital (Mexico City) and Great North Museum (Newcastle), whilst he also appears regularly at literary events and festivals, including for the BBC Proms, Royal Festival Hall and British Council. A new book, I’m *totally* killing your vibes, is due to be published by Bloodaxe in 2021.

The project is in partnership with South London Gallery and is supported by New Contemporaries: Bridget Riley Artists’ Professional Development Programme.